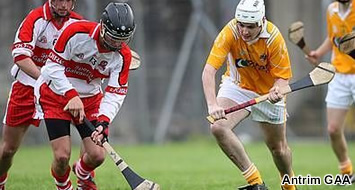 Antrim Under 21 hurlers saw another Ulster title go by the wayside when a second-half capitulation saw them lose to Derry at Celtic Park on Wednesday evening.

During the first half the young Saffrons had played some good hurling and with team captain Eddie McCloskey sending over some very good points and Colm Duffin grabbing a goal they led at the break by 1-9 to 0-7.

However in the second-half they failed to produce the goods and managed to add just two more points, and when a well drilled and determined Derry team upped the pace the Antrim challenge faded.

Antrim still managed to maintain their lead until the dying minutes and had a series of chances to add to it but a series of unbelievable misses saw them fall to defeat to the Oak Leafers for the second year in succession.