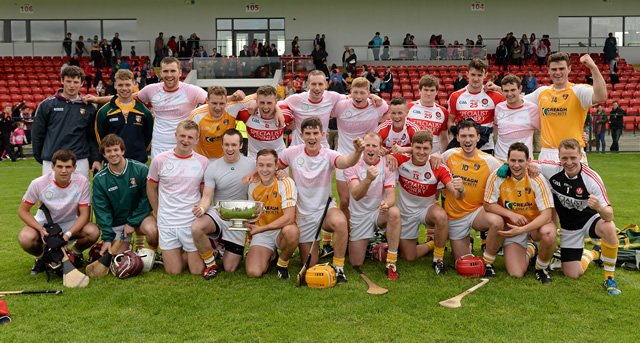 Antrim have secured a 13th Ulster Senior Hurling title in a row with a 1 point victory over Derry at Owenbeg.

Antrim blasted out of the blocks with a PJ O Connell goal after just 22 seconds, however Ruairi Convery was able to keep Derry in touch from placed balls.

On 24 minutes Convery brought the sides level with a goal of his own, but Paul Shields replied with a brace of points to re-establish Antrim’s lead.

Derry were then reduced to 14 men as Tiarnan McCloskey was shown a straight red card for a face guard infringement, but it was the Oak Leaf men who finished the first half stronger and went in 1-9 to 1-8 up at the break.

Aaron Kelly opened the second half scoring to stretch Derry’s lead to 2. The third quarter was very much nip and tuck before Conor McCann fired home after a well worked move to edge the Saffrons back in front.

Derry continued to battle hard and with 5 minutes remaining the sides were locked at 2-15 each, P McCloskey with Derry’s second major.

Daniel McKernan put Antrim in front, before another free from the excellent Convery looked like he had secured the draw for Derry as we approached injury time. However, in the dying seconds McKernan slotted over a superb late winner to ensure that the Liam Harvey Cup would stay in Antrim for another year.