Home / Celtic Park to light up for NFL 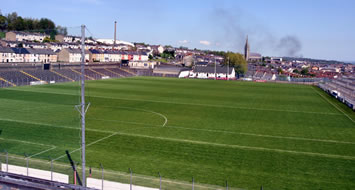 Derry chiefs are hoping to unveil new floodlights in Celtic Park before the start of the county’s NFL campaign begins against Mayo on February 2.

The floodlights were supposed to be in place before Christmas but a series of unanticipated delays hampered work on the project.

Celtic Park was the venue for the Derry county final as well as Glenullin’s clash with Newtownbutler in the Ulster Club Championship.

Further delays were caused by adverse weather conditions over the festive period, but Derry chairman Seamus McCloy insists that Celtic Park will be lit up for the National league opener against Mayo.

“The floodlights will be ready for the first national league match,” McCloy said.

“The pitch is not ready yet. They want to tidy things up. I’m happy enough to accept that we’ll be ready for the National League,” he added.