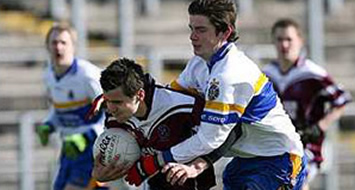 After hosting the MacRory and MacLarnon Cup Finals for 11 consecutive years, the coincidence of two home National League games on 15th and 16th March has prompted Coiste Aontroma to consider the advisability of hosting the 2 high-profile Colleges Finals on the 17th March this year.

County Secretary Jim Murray explains “We play Carlow in the National Football League on the 15th at 7.00pm, and our hurlers play Cork on the 16th; we have to consider whether we can subject the pitch to 4 matches in less than 48 hours, even in the most favourable weather conditions; there is the additional issue of the demands on our hardworking teams of stewards. We broached these matters with the Colleges Council about 2 weeks ago, and jointly agreed at that stage that it would be advisable to seek an alternative venue in the unusual circumstances of this particular year. We further agreed to defer any announcement until now so as not to deflect attention from the semi finals which were decided last weekend.”

In response, Brother Ennis, Chairman of the Ulster Colleges Council said: “Casement Park is our ‘spiritual home’ on the 17th March each year, and we are hugely appreciative of the hospitability and support afforded us by Coiste Aontroma over many years. We do understand the reservations which pertain this year. The Casement authorities are rightly cautious about the multiplicity of fixtures on the same weekend. Coincidentally, the MacRory Cup Finalists this year are from the west of the province and, fortunately, Healy Park Omagh has been made available to us on this occasion. However, Casement remains our spiritual home, and we look forward to being back in that unique arena on the 17th March in future years”.