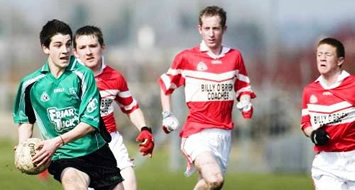 The Ulster Bank Vocational Schools finals scheduled for today (Friday 29th February) at Healy Park were called off due to the pitch being unplayable.

In the Arthurs Cup Final (U16), St Pauls HS Bessbrook were due to face De La Salle Downpatrick with a 1.00pm throw in.

Holy Trinity Cookstown were due to face St Pauls HS Bessbrook in the McDevitt Cup Final (U14).

These games have been re-fixed as follows: