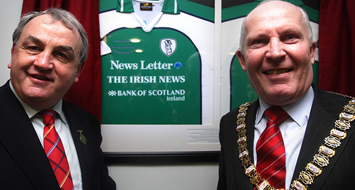 The Belfast Cuchullains are a post-primary school hurling team of 20 all of whom are under the age of 16, the players from the following schools:

The team has been in existence for just over two years and have participated in the range of events, which have included Shinty games in Scotland. The children in the team represent both the Catholic and Protestant traditions.

Comhairle Uladh has formed a strong link with the team and the schools leading the project, following a successful trip to the All-Ireland Hurling Final by the teachers and Governors of the schools involved in the Cuchullains project, it was decided that Cumann Lúthchleas Gael and the Ulster Council would facilitate a tour of the United States by the team. A group of 32, which comprises of 5 pupils and two teachers from each school and four representatives from the GAA will travel in July this year.

The team will travel to New York, Boston, Philadelphia, and Washington from 18th July to 28th July and will participate in the intercontinental Youth Games held in Philadelphia.