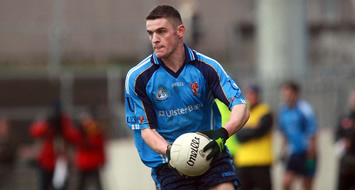 UUJ kept their hopes of a first Sigerson Cup title in seven years alive after defeating DIT in Carlow on Saturday evening.

Thomas McCann and Paddy Cunningham starred for the northern side as they swept to a convincing eight-point win.

It was close in the opening ten minutes of the game and the sides were level on two occasions, with Mark Vaughan kicking the first of three frees in the opening period inside the first minute.

Derry star Mark Lynch and Darren Hughes of Monaghan managed quickfire responses to give UUJ the upper hand soon after.

DIT failed to take advantage of the strong breeze in the first half and they looked uncomfortable in defence at times.

McCann was the real hero for the Ulster college as he grabbed both goals to give his side a four-point lead at the break.

Vaughan, Aidan Kilcoyne and defenders Eoghan Naughton and Liam Fleming were all on the mark for DIT, with the bleached blond Dublin attacker pointing brilliantly from a sideline kick on 14 minutes.

Both sides struggled to find their rhythm in the second half and UUJ were dealt a blow when Darren Hughes was sent off for a second yellow card on for a challenge on Shane Ryan.

Vaughan and substitute Paul Flynn scored points for DIT late on, but UUJ held out well for a deserved eight-point victory.