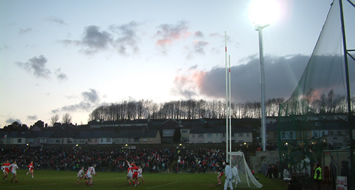 The new state of the art floodlighting system in Celtic Park, Derry was officially switched on at the Derry v Tyrone NFL match on Saturday night.

The installation was completed by Barrett Electrical Ltd of Omagh who have been responsible for 5 of the 8 contracts in the Province.

Danny Murphy, the Provincial Director of the Ulster GAA performed the official switch on at half time during the fixture.

Cathal Logue attended on behalf of Sport Northern Ireland who provided significant funding for the project.

Also attending were Seamus McCloy, Chairman of the Derry County Board along with Michael Hasson (Ulster GAA PRO), Stephen McGeehan and Liam Nelis who were responsible for the project management of the scheme.

The new floodlighting system is part of the ongoing modernization of the venue which will see a new 4,000 capacity covered stand being erected at Celtic Park with more support coming from Sport Northern Ireland and the GAA at Central and Provincial level.