Home / Late Goal wins U21 FC for Down 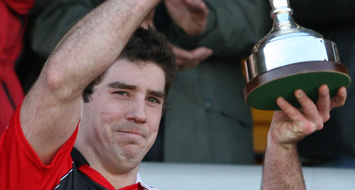 Down staged a dramatic late victory over Derry in the Cadbury’s Ulster U21 FC final at Casement Park.

Derry started off the brighter and raced into a 0-05 to 0-02 lead, with Kilrea forward James Kielt helping himself to 2 points.

However, goals from Conor Garvey and Paul McComiskey sent the Mourne Men in with a 2-05 to 0-08 lead at half-time.

Derry responded well after the break with a goal from Sean Leo McGoldrick, and a point from Paul McVey put them back in the driving seat.

On the hour mark, Down corner forward Ryan Kelly found the net to make it 3-10 to 1-13 to effectively seal the win for his side.