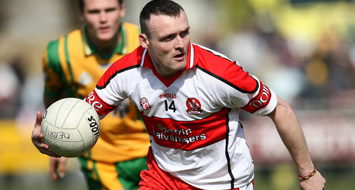 Their safety was rarely in doubt with Kildare needing to overhaul a 13 point gap in points difference to put Tyrone in danger.

Still, Mickey Harte will be pleased to see his side take the win, while Brian McGuigan played a fantastic full 70 minutes on his return from almost two years of crippling injury which looked to have ended his intercounty career.

Mayo took the lead two minutes in through a Conor Mortimer free off his left foot, a score he repeated minutes later, Tyrone hitting back through Sean Cavanagh and Colm McCullagh on 10 minutes. With 25 minutes gone the sides were level on four points each.

Cavanagh and McCullagh were operating in a two-man full forward line, and began tormenting Mayo over the rest of the first half.

McCullagh, Davey Harte and Cavanagh added further points to give the hosts the lead, Cavanagh almost adding a goal when his effort was saved by David Clarke in the Mayo goal. O’Malley and Tom Parsons hit two more points for the visitors.

Mayo then missed a penalty which could have swung the game in their favour, Austin O’Malley playing the ball into Mortimer, who got tangled with Tyrone goalkeeper Paschal McConnell.

The referee awarded the penalty, but McConnell tipped Andy Moran’s penalty around the post. Tyrone led 0-8 to 0-5 at the break.

Cavanagh, Tommy McGuigan and Enda McGinley added three quick points at the start of the second half to pull Tyrone further clear, Moran missing another good sight of goal for Mayo.

Both sides traded points in the final quarter, Tyrone holding out for the win, Mayo left to rue wasted efforts in front of goal.

Derry advanced to the Division One final with Kerry, and earned a psychological advantage over their rivals ahead of their Ulster Championship meeting on June 1, winning out in Letterkenny.

Derry played with the wind in the first half, and led 0-10 to 0-3 at the break, Paddy Bradley scoring four.

Conleth Gilligan opened the scoring with a free on 30 seconds, and they added to it with an Eoin Bradley point on seven minutes, Michael Hegarty answering for Donegal on 10 minutes.

Midfielder James Conway hit the next score for Derry, while Donegal by then already had three wides.

After another point, Donegal then went 15 minutes without scoring, with Gilligan, (0-2), Paraic O’Doherty and Paddy Bradley all scoring in quick succession. Colm McFadden hit back for the hosts on the stroke of half-time.

McFadden then hit three of four unanswered Donegal points ten minutes into the second half, but they were never fully in contention despite the gap being reduced to four points entering the final stages.

Wing back Michael McIver put five between the sides three minutes from the end, Enda Muldoon scoring from a free to leave them six ahead in injury time, Michael Hegarty pointing a penalty for Donegal at the death.

Bradley finished the game with six points, while Gerald O’Kane went off injured for the winners, who now advance to their first major final since 2000, the last time they won the league.

Before almost 10,000 spectators both teams offered a game of Championship intensity that was played in brilliant sun-shine and there was certainly no fear of rain stopping play for this encounter.

A fortnight previously both teams travelled to the venue in vein as referee Derek Fahy deemed that the pitch was unplayable and again Fahy played a central role in the refixed encounter – dismissing Dublin’s Alan Brogan with eight minutes remaining.

The St. Oliver Plunkett’s player had only been on the pitch for 12 minutes, after being introduced midway through the second half for Jason Sherlock.

Dublin began the game at brilliant pace and led by 1-1 to 0-1 after just three minutes thanks to a Bernard Brogan goal, following a well placed pass from Jason Sherlock.

However the industrious work of Steven McDonnell, Paddy McKeever and Ronan Clarke ensured Armagh drew level by the 12th minute, and the sides were to be level on two further occasions during the opening 35 minutes, before Armagh pulled away before the break thanks to a flourish of points from Tony Kernan and Ronan Clarke, ensuring a 0-8 to 1-3 interval lead.

The introduction of Ciaran Whelan to the Dublin midfield promised much for the second half and ‘Pillar’ Caffrey’s charges certainly performed well over the third quarter.

The gap was cut to a point 11 minutes in, following good work by both sides but Armagh still held the initiative on the score-sheet and a 50th minute goal from Charlie Vernon sent the large crowd into raptures.

Vernon’s goal arrived after a great inter-passing movement with full-forward Ronan Clarke before the Armagh Harps man, who replaced Kieran Toner at midfield before throw-in crashed the ball past Stephen Cluxton.

But Dublin failed to wilt as two Conal Kearney frees kept them in contention, however Armagh were by far the better side over the final quarter as goals from Steven McDonnell and Ronan Clarke sealed the issue.

Although tempers became heated late on with Alan Brogan’s dismissal, referee Derek Fahy kept a tight control on the game, and allowed for some excellent free-flowing football to be produced.

Down cruised to a seven-point win over Limerick in Allianz a high-scoring NFL Division Three clash at Newry on Sunday afternoon.

An Aidan Carr penalty, and further goals by Daniel Hughes and a brace from John Clarke set Down on their way.

Limerick finished with 14 men after Thomas Cahill was sent off after an incident involving Jack Lynch.