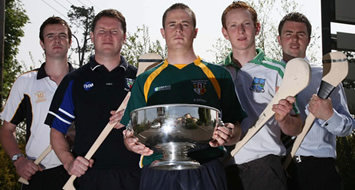 The 2008 Ulster Senior Hurling Championship swings into action this weekend as Cavan face Monaghan in Breffni Park and Fermanagh take on Tyrone in Lisnaskea.

All four counties will be looking forward to the task having already fared very well in the NHL Division 3 and 4 series over the past few months.

Monaghan, the new NHL Division 4 champions, following their one point win after extra time over South Down in an exciting final will be hoping to make the next round when they travel to Kingspan Breffni Park, Cavan to take on the home county. In their NHL encounter Monaghan won by 4-15 to 3-4 and will be hoping for a repeat performance.

Cavan have been making good strides in recent years, however they are still in the embryonic stage. They will be depending on players like Paul Sheridan, Mick O’Gorman and Gerard Clerkin to contain Monaghan. Overall the Farney men look the more capable side and should repeat their league success.

The spotlight is also at Emmett Park Lisnaskea where Fermanagh and Tyrone meet in what should be an entertaining game.

Fermanagh played in the NHL Division 4. They pulled off a shock but brilliant victory over eventual winners Monaghan by 2-10 to 2-5 but just missed out a final place on score difference to South Down. That defeat was their only loss in the league.

Tyrone played in the NHL Division 3 – winning two and losing two – but failed to make the final. They lost to Donegal in their opening game but had wins over Longford and Sligo. Two years ago they also missed out on a Nicky Rackard Cup semi final spot. The side is managed by former Derry boss Kevin McNaughton who has gathered together a very fine squad of players.
Overall Tyrone possess the greater strength in depth and teamwork and will be favourites to make the quarter final with something to spare.

The full draw for the Championship is as follows:

(Extra Time must be played in all games up to and including Quarter Finals if necessary):