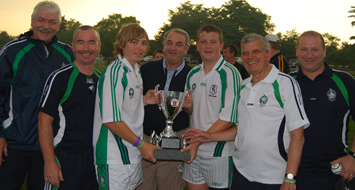 Cross Community Under 16 Hurling Team the Belfast Cúchulainns have won the Under 16 Hurling Championships, defeating New York 3-12 to 1-5 in the final of the Intercontinental Youth Games in Philadelphia.

The team, which return home on Tuesday 29th July after a 10 day American tour won every game of their section beating teams from San Francisco, Boston as well as a North American Combined team.

The hurling team, which is a cross-community inter-school hurling team of 20 Boys all of whom are under the age of 16, have five players from four schools namely Corpus Christi College, St. Patrick’s College Beranagheeha, Belfast Boys Model School and Ashfield Boys School.

The tour, led by Ulster GAA President Tom Daly and Director of Coaching and Games Dr. Eugene Young, started in New York with a challenge match at Gaelic Park against a the New York Under 16 development team before moving on to Washington.

The team completed the tour by participating in the North American GAA Continental Youth Games in Philadelphia.

Tom Daly President of Ulster GAA said: “I am delighted that Ulster GAA is involved in developing this flagship project which merges the two main cultural traditions of Ulster together embracing both respect and diversity.

Danny Murphy Director of Ulster GAA, who established the project with school Principals Andy McMorran, PJ O’Grady, Dan McGivern and Jim Keith highlighted that the Cúchulainns are the first of several cross community hurling teams, which the Ulster GAA plan to establish over the next year. ““Already we have had great interest from other schools in urban areas that are willing to establish teams similar to the Cúchulainns and we envisage our first cross-community Hurling competition taking place in 2009. Additionally we hope to select an Ulster All-Star U-16 Hurling Team from this competition to play an international match against a Scottish Shinty select on an annual basis”.

Andy McMorran Principal of Ashfield Boys School praised the project, “This has been an outstanding initiative which has given all the boys involved with the team the opportunity to see America and develop new friendships. All the lads and the adults involved in the project have developed a strong bond over the past year and it has been an excellent educational experience for all of us, I am thankful to both Danny Murphy, Eugene Young and the GAA  for their support in developing this project.

The cross community hurling project has been in existence for just over two years and the schools playing under the Cúchulainns banner have participated in the range of events, which included travelling to Scotland in 2007 to play a Scotland in a International Shinty match. The favour was repaid on 26th June when a Scottish Under 16 Shinty select travelled to Stormont to play the Belfast team in an international challenge match hosted by the UIster Council.  The children who are part of the Cúchulainns team  represent both religious dominations and live in North, West and East Belfast.

The project has received backing from some high praise and in March this year the Principals of the schools involved in the project were invited to meet the Queen at Hillsborough while the entire travelling party were also recently invited to Aras an Uachtarain and received an audience with the President of Ireland Mary McAleese.