Home / Tyrone goes Back to the Future 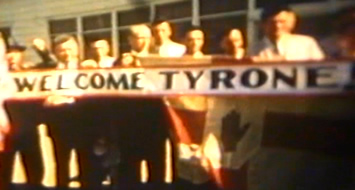 Tyrone GAA followers will go back in time to the 1950s at a special history evening in the Cardinal Ó Fiaich Library and Archive, Armagh, next Thursday, 3 February, at 7.30 pm.

This event, which follows on from the tremendously successful Tyrone GAA history night in the library last October, is entitled ‘Back to the Future Part II’, as it revisits the momentous decade that was the 1950s.

Jody O’Neill, the captain of the team that won the Anglo-Celt Cup for the county for the very first time in 1956, will deliver a short talk of personal reflections on the breakthrough experiences.

Preceding this, Joseph Martin, the author of The GAA in Tyrone, will deliver a talk entitled ‘Through the Lean Years: The GAA in Tyrone, 1900-55’, which will outline the reasons why it took the county so long to rise to prominence.

The second part of the event will consist of the showing of clips from two rarely seen colour films from the period. The first is of action from the Tyrone v. Armagh football challenge game at the opening of Maghery field in August 1956. The second features the county team’s trip to America in 1957, which was the first such expedition by any Ulster county other than Cavan. Several members of the successful 1956-57 county senior football teams have already confirmed their attendance to relive these memories.

Finally, the event will feature two formal presentations of invaluable historical documents from Tyrone to the Cardinal Ó Fiaich Library and Archive. The first is the manuscript of a poem written by Dungannon man Thomas Clarke while in Chatham Prison, England, in the 1880s, three decades before he took part in the 1916 Easter Rising and was executed.

In this poem, whichClarke wrote on watermarked prison notepaper to a fellow inmate, he tried to maintain an upbeat mood as he contemplated another Christmas spent in jail. He served over 15 years of penal servitude in various English prisons between 1883 and 1898. The document is being kindly given to the library on a long-term loan basis by Thomas Clarke’s GAC, Dungannon.

The second presentation involves the Tyrone County Board minute-books from the mid-1920s onwards. These are the oldest known GAA county minute-books still in existence in Ulster. They constitute a very important historical treasure, as they yield precious information on the organisational, financial and other difficulties that hampered the development of the GAA in the county. Among the many outstanding items in the books is a handwritten note of a reorganisation convention held in Coalisland in May 1923, which resulted in the re-establishment of the county board after a hiatus of almost three years during the post-partition period.

Admission is free of charge, and light refreshments will be served. Due to pressure for places anyone wishing to attend should ring the library at 028-37522981 or e-mail dmcanallen@ireland.com in order to guarantee a seat.