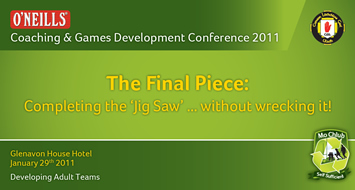 Coaches within Ulster look forward every year to the annual Ulster GAA Coaching Conference.  This year’s event will take place in the Glenavon Hotel, Cookstown, on Saturday 29th January, which is now a SOLD OUT event.

The event follows a four year cycle, and this is year three in the current sequence, which has seen Conference themes of 2009 ‘Coaching Children’, 2010 ‘Coaching the Youth’, 2011 Coaching Adults and the final theme of Coaching within the Education Sector will be run out next year.

Key note speakers include former Down All Ireland winning manager Pete McGrath, who will advise the coaches on ‘Creating Champions’; All Ireland Final referee Pat McEnaney will speak on the GAA’s Respect Initiative and it means to both players and referees; former dual star for Kevin Lynchs and St Canice’s Dungiven, and current EBU European Boxing Champion, Paul McCloskey will be the guest speaker; and All Ireland Minor football winning manager, Raymond Munroe will share his experiences of the ‘Training to Win’ phase of the long term player development model and how to nurture minor players into the senior team..

Delegates will have the opportunity to attend a series of workshops on critical adult development themes including the ‘Profiling and Fitness Assessment of Players’, ‘Coaching Team Play and Tactical Awareness in Hurling’, ‘Conditioning for Club Players Throughout the Year including Pre season, Playing Season and Off Season and ‘Developing High Intensity Football – Coaching Practice and Intensity.

This conference has now SOLD OUT however anyone wishing to find out more can contact Kevin Kelly immediately on +44 28 37517 180 or email conference.ulster@gaa.ie