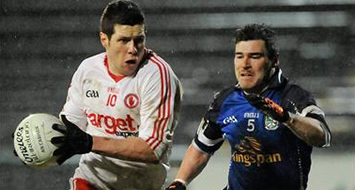 Goals win matches, as experienced Tyrone clearly showed in their dismissal of a plucky Cavan side in Brewster Park last night.

The Red Hands struck two killer goals early in the second half from Martin Penrose and Patrick McNiece to see off the Cavan challenge.

The home side were leading 0-11 to 0-6 when Penrose coolly converted a penalty after corner-forward Mark Donnelly was up-ended in the square.

Youthful Cavan refused to buckle, despite the fact they were always playing catch-up, as Tyrone brought on Stephen O’Neill – who helped himself to a pair of points – to effectively seal matters.

Cavan dominated the opening half and were well worth their 0-10 to 0-6 half-time lead, thanks to some superb accuracy from corner-forward Seanie Johnston, who ended his shift with a superb total of 0-9 in a losing cause.

But after those killer goals there was simply no stopping last year’s finalists.