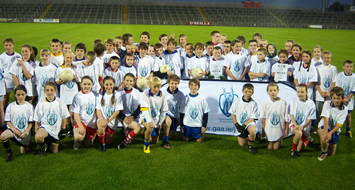 The event was a culmination of a selection process which took place in Belfast clubs allowing the coaches to carry out skills tests with their U12 Hurling, Camogie, Boys and Girls Football teams.

The top scorers from each club then progressed to this event in Casement Park. The level of competition from the children was high and required composure in front of a sizeable crowd of onlookers.

The competitors faced tough testing on their pick-up, solo ability, put, kick, handpass and shooting accuracy with both feet.  The winners on the night did so by the smallest of margins showing just how close the competition was. The highest scorers in all codes received an O’Neills Voucher.

Congratulations to not only the winners but all the children who participated, making this a very successful event for all involved.