Home / Cavan Ladies to do it all over again 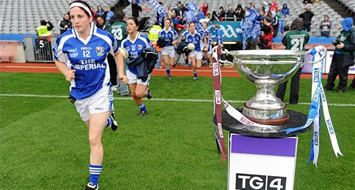 Cavan came from three points down in the final six minutes to salvage a draw against Westmeath in the TG4 All-Ireland Ladies Intermediate Football Championship final at Croke Park. Second-half goals from Johanna Maher and substitute Karen Hegarty helped Westmeath to overturn a two-point half-time deficit and lead by 2-05 to 0-08 with 49 minutes on the watch.

Sub Daena Clerkin hauled Cavan back into contention with a 54th minute score before a brace of frees from captain Aisling Doonan restored parity for the Breffni ladies. Doonan was the pivotal figure for Cavan, top-scoring with six points and producing some majestic moments of individual brilliance. In the 16th minute, the Templeport ace crashed a shot off the crossbar after her initial effort was kept out by Westmeath goalkeeper Gemma Leahy. And two minutes later, Doonan had the audacity to convert a sideline kick from the Cusack Stand side of the field over the Davin Stand crossbar. Leahy was called upon again in the 22nd minute to keep out Renée Murphy as Cavan threatened again, but it wasnt all one-way traffic as Cavan goalkeeper Christine McCutchon had pulled off a good save in the tenth minute to deny Westmeath captain Elaine Finn from close range. The sides were level twice in the first half before points from Murphy and Doonan opened up a 0-05 to 0-03 interval lead for Cavan.

They cruised into a 0-07 to 0-03 lead within five minutes of the restart but Westmeath roared back into contention in the 40th minute when Ruth Kearney placed Maher for a well-taken goal. The Westmeath comeback was complete in the 47th minute when Kearneys shot was saved by McCutchon and Hegarty blasted home the rebound. The Lake Countys second goal saw them move 2-04 to 0-08 clear before sub Emma Morris fisted a 49th minute point to extend the lead. Westmeath looked primed to land the Mary Quinn Memorial Cup at that point. But Cavan, contesting a first All-Ireland final since the 1981 senior decider, refused to yield and came storming back to secure a replay.  The replay is expected to take place on Sunday, 9 October, at a venue to be confirmed.