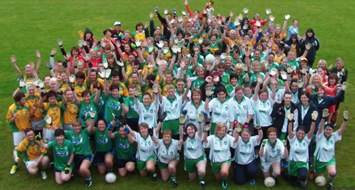 On Sunday 4th September Drumragh Sarsfields GFC played host to the final Ulster Gaelic4Mothers blitz for 2011 and what a day it was!  160 mums from 13 different clubs around the province took to the pitch in the lashing rain and although they were soaked to the skin there were smiles on every single face throughout.

The Gaelic4Mothers initiative has proven to be one of the most successful development initiatives of the Ladies Gaelic Football Association and clubs from around the province are reaping the rewards of having this new band of players, coaches and volunteers involved in their club.  Speaking at the Ulster Blitz Peter Donaghey from the Drumragh club spoke of how the initiative has helped in his club saying “Gaelic4Mothers has been a great innovation for the club.  It’s totally reinvigorated it because it’s brought in new people.  It’s given the ladies the chance to play football given that they’ve always just ferried their children and partners to games and it’s given them a great interest; it’s actually given the club some new coaches!  There’s just a real feel good factor around the club and so many more people are willing to get involved and help out.  The benefits can’t be overstated!”

Sheena Kelly Ladies Football Development Officer for Ulster GAA and organiser of the event said “Today’s been another great day for Ladies Football.  The mums taking part today have come on leaps and bounds since they first started playing a couple of years ago and the friendships they’ve built up along the way are brilliant.  They really look forward to coming together for each of our blitzes and are already planning their next day out!”

Many thanks to all those who helped make the blitz possible; the pitch co-ordinators and referees and most importantly Drumagh GFC for their fantastic hospitality!

Pictured are some of the mums from Antrim, Donegal, Tyrone, Down and Armagh who were among those who made the trip to the Tyrone club.  Gaelic4Mothers is available for all clubs to take part in, for more information contact Sheena Kelly at sheena.kelly.ulster@gaa.ie