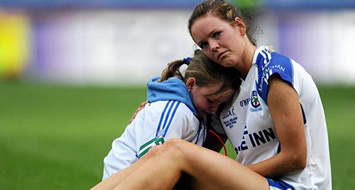 Goals proved crucial for Cork as the Leesiders captured a sixth TG4 All-Ireland Ladies Senior Football Championship crown in seven seasons at Croke Park yesterday. The Munster champions lost to Tyrone at the quarter-final stage last year but have hit back in impressive fashion in 2011, adding the Brendan Martin Cup to the Bord Gáis Energy National League and Munster championship crowns collected earlier in the season.

Cork routed Monaghan by 14 points in the 2008 decider but just two points separated the sides today as the Ulster champions put up a huge fight. Monaghan came from two points down to lead by a point twice in the second half but then the Farney girls conceded a killer penalty in the 43rd minute. Monaghan sub Isobel Kierans hauled down Cork replacement Orla Finn and Rhona Ni Bhuachalla made no mistake to hand the winners a 2-05 to 0-08 advantage. It was the second time that Monaghan had conceded a goal at a crucial time, as Nollaig Clearys 21st minute effort gave Cork a 1-03 to 0-03 lead. And again, it was an avoidable score from a Monaghan perspective as Linda Martins mistake was pounced on by Cleary, who lobbed the unfortunate goalkeeper at the Hill 16 end.

For much of the game, Monaghan stood toe to toe with their much-vaunted opponents as they chased a first All-Ireland senior crown since 1997. But ultimately, they were left empty-handed once again; suffering a sixth defeat in their eighth final appearance, but this was a hugely respectable performance by Gregory McGonagles team.

Experience counted for a huge amount in Corks victory but there was a black spot on the afternoon as captain Amy OShea suffered suspected cruciate knee ligament damage in the second half. The corner forward has already experienced the dreaded injury in both knees and addressed the media after the game with a protective brace on her right knee. OShea scored a hat-trick of goals against Laois in the semi-final and went close to another in the third minute today, with her third minute deflected shot rattling the Monaghan crossbar.

The sides were level three times in the opening twenty minutes before Cleary struck that crucial goal in a low-scoring first half. OShea could have added a second but in untypical fashion, she fouled the ball when through on goal in the 23rd minute. At the other end, Ellen McCarron blazed over the crossbar on the stroke of half-time with a goal for the taking.

But Monaghan opened the second half in determined fashion as Ciara McAnespie pointed within 20 seconds of the restart, before Niamh Kindlon added two points to put Monaghan a point clear, 0-07 to 1-03. The sides traded scores as Monaghan edged clear again before Geraldine OFlynn surged forward for an inspirational Cork score with twenty minutes remaining to level the scores at 1-05 to 0-08. Then, disaster struck for Monaghan when Kierans fouled Finn and from the resultant penalty, Ní Bhuachalla made no mistake.

Monaghan did get back to within a point, 0-11 to 2-06, in the closing minutes but midfielder Rena Buckley banged over a 55th minute point for Cork to restore a two-point buffer. And calling on all of their experience in the games dying embers, Cork cleverly used possession to run down the clock. Defensively, this was an impressive display from the Rebelettes, with full-back Angela Walsh and corner back Deirdre OReilly outstanding.