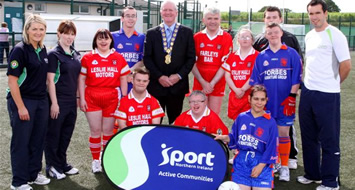 The initiative was organised by Geraldine Christie, Active Communities Gaelic Coach and its success was due to the extensive coaching programme that was delivered throughout both Council areas. Adults with Mild Learning Disabilities participated in a 6 week programme of adapted Gaelic Football using fun games and skills. The players have performed exhibition games at half time at the Ulster Senior Football Championship, Ladies Ulster Championship, Tyrone Ladies Championship and the first ever Intercounty Gaelic Football blitz.

This Fun Blitz was made possible by the dedicated and committed coaching at grassroots throughout recent years made possible by Ulster GAA in partnership with the Disability Sport NI, Active Communities coaches, County Boards, Local Councils and local community groups.

Funded By Sport Northern Ireland and Tyrone and Ulster GAA the ‘Active Communities in Gaelic Games’ is a programme that aims to increase participation in sport and physical recreation in communities throughout NI, especially amongst under represented groups including women and girls, people with a disability and older people. Sport NI will invest up to £13.5 million in the employment, deployment and training of a network of 100+ coaches who will facilitate the delivery of a wide range of sports and activities in all 26 district council areas of NI.