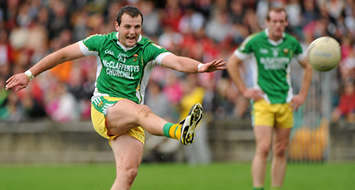 Michael Murphy scored an injury time penalty to snatch a dramatic victory for Glenswilly over Cavan Gaels at Kingspan Breffni Park on Sunday.

Glenswilly’s star man slotted home the crucial score after Neil Gallagher was fouled to send the Donegal champions into the next round, which will now have to be delayed until after the International Rules Series because Murphy is travelling to Australia at the end of this week with the Ireland squad.

Playing with the wind, Gaels led by 0-6 to 0-3, with Seán Johnson and Micheál Lyng scoring crucial points.

However, Glenswilly were level by the break, 0-6 to 0-6, as Darren McGinley and Gary McFadden were on target for the Donegal men.

Gaels missed two fine goal chances after the break and despite building a 0-10 to 0-8 lead, were made to pay the price when Murphy hit the back of the net in injury time.