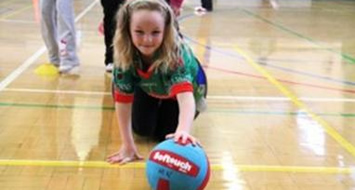 Over 200 children aged between 6 and 8 years old from the North Derry primary schools enjoyed a full day of GAA fun at Roe Valley Leisure Centre, Limavady provided by the Ulster GAA KS1 coaches. Across three indoor halls the future GAA stars took part in small sided games and FUNdamental skill stations based on handling skills they have been developing during their PE lessons with their coach. Similar events will be staged in South Derry and in the city later in the school year focussing on kicking and striking skills.

On Tuesday 22nd November, the Derry Coaching staff organised a very successful Hurling Blitz for Key Stage 1 children in Lavey GAC. The event was attended by 5 schools, each with an “A” team and a “B” team. The event was aimed at increasing the boys’ ground striking ability, with each school playing a total of 8 games each. It was a very worthwhile day with a total of 68 boys participating and everyone having a fun filled time.

A special thanks must go to Derry Key Stage one coaches Fionntan O Dowd and Ruairi Convery who helped co-ordinate and organise the day. The County hopes to follow up on this successful days hurling with an outdoor key stage blitz in the Spring.