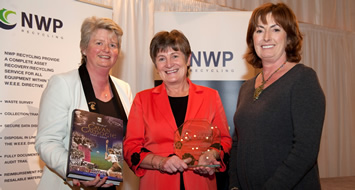 Two awards were handed out at Minor level, with Antrim’s Ruby Marie Rice taking the award for the Cup competition, while Armagh’s Eadaoin Murphy was honoured with the Shield accolade.

The area of administration was also heavily recognised at the event, with Derry’s Sinead Cassidy claiming the Administrator of the Year award.

Cavan’s Maura McGurran was honoured as the volunteer of the year, while Antrim’s Michael Costello beat off stiff competition to take the PRO of the Year award.

Armagh picked up the Match Programme of the Year award for the second year in succession.

Meanwhile, a special Chairpersons award was presented to the Cavan Camogie Board by Ulster Chairperson Kathleen Woods in recognition of their outstanding work for their publication ‘Cavan Camogie 1909-2009’ which chronicles the history of Cavan camogie in a 400+ page full-colour hardback publication.

Also at the lunch a special presentation was made by Camogie Association President Joan O’Flynn to Catherine O’Hara, for Catherine’s outstanding service to Ulster camogie.