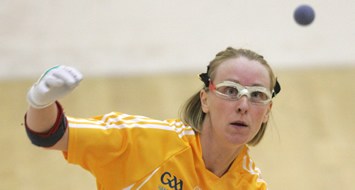 World Handball Ladies champion, Belfast’s Fiona Shannon joined the pupils of Holy Cross Boys’ Primary School this week to help launch their new One-Wall Handball facility recently installed at the school. The school has competed successfully for the past decade in the 4-Wall version of Handball, but the latest craze of the One-Wall code has been welcomed.

GAA Handball Ireland Chief Executive Officer, Chris Curran, made the boys aware of the possibility of One-Wall Handball being an Olympic sport in the not too distant future, and that he hoped to see some of the boys at the World Handball Championships 2012, scheduled for the City West hotel in Dublin, next October.

World champ, Shannon, GAA Handball Development Officer, Darragh Daly and former pupil and current under 21 Ulster singles winner, Sean Clarke were on hand to pass on some advice for the pupils to improve on their technique and skills.

“It’s a great day for the school and we know the boys will benefit greatly from this new facility in the school hall,” said Handball Coordinator, Ciaran Curran.

“The local GAA club, Ardoyne Kickhams has always helped and supported the school in all GAA activities over the years and that has been the key reason as to why the boys have been able to get introduced to the game.”

“Now with two one wall courts in our own school hall, we can really push forward in developing the game. Handball has so many benefits for the children as it enhances their hand and eye coordination and there are obvious health benefits.”

The visit to the school can be viewed on TG4 in the New Year as part of the GAA Handball programme.