Home / Derry and Armagh pipped by Leinster Duo in U16 Finals 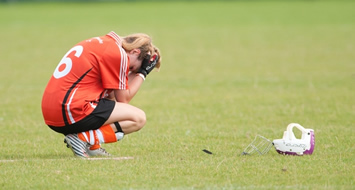 Offaly and Westmeath done a double over Ulster opposition in the U16 Camogie Finals, with the Faithful coming out on top of a high-scoring encounter against Derry on a scoreline of 5-10 to 2-5, while the Lakesiders edged out Armagh 1-10 to 2-4.

Although it was double scores in the B final, Derry had a significant input into an entertaining clash. Newbridge starlet, Aimee Devlin plundered two goals and Lavey’s Aoife Shaw shot four points, two of which came from play.

It just wasn’t enough though against an Offaly team with a wide range of attacking talent however. Vice-captain, Christine Cleary scored 2-2, while Rachel Brennan also bagged two goals and added a point.

Lisa Gorman found the net as well and raised a white flag, while Mairéad Jennings from the famed Birr club slotted three frees in a five-point tally to confirm her side’s second success at this level.

Westmeath were pushed all the way to the wire by Armagh but Aoife Corcoran’s six-point contribution proved crucial as they repeated the championship glory achieved by the U16s of 2009. The Castletown Geoghegan ace converted four frees and a 45 to keep her side’s noses in front.

Hannah Gray was chief scorer for the gallant Orchard County girls, hitting a goal and three points from frees. Shannon Kelly poached a second goal, while Emma McGuigan raised a white flag but they needed one more goal and were unable to break down a resolute Westmeath rearguard for a third time.