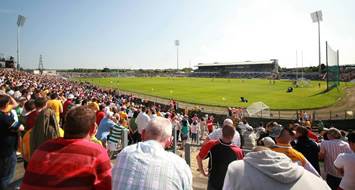 A significant milestone has been reached in the major project for the redevelopment of Casement Park, as the major Provincial stadium for Gaelic Games in Ulster, also serving future needs of Antrim GAA County Board.  After a lengthy and intensive public procurement process, Ulster GAA, with the approval of the Minister for Culture, Arts and Leisure Carál Ní Chuilín and her Department, is pleased to announce the appointment of world renowned stadium designers Mott MacDonald Ltd together with a team of consultants, as the Integrated Consultancy Team (ICT) to take forward the design of the new stadium.

Reaching this stage of the process is a major milestone for Ulster Council of GAA as it represents real and tangible progress on the long held strategic ambition of the GAA at Provincial and Central level to provide a modern, fit-for-purpose and iconic stadium to meet the needs of the GAA in Ulster for the next half century.

This progress is predicated on a very substantial financial commitment of the order of £61.4million committed by the NI Executive through the Minister and Department of Culture, Arts and Leisure earlier this year.  This is complimented by a significant commitment from Central Council of GAA in Ireland to provide partnership funding up to the level of £15million.  When completed the redeveloped Casement Park will consist of a 40,000 all seated stadium, substantially covered, designed to the highest standards of public safety and with modern facilities for players, spectators and officials.  In approaching the development of the design brief and the provision of a new stadium, care and attention will be paid to ensuring that the new stadium will also add to the community asset base of the greater Belfast area.

From the outset of this project, the project delivery structure established by Ulster GAA which centres on a Project Board and three Sub Committees has attached a significant premium to the role which community consultation and engagement will have throughout the planning and development of the project.  A specific sub-committee dealing with community engagement and public relations has been in place for some time.  It includes community representation and has already met on a regular basis with an elected residents committee of the immediate environs surrounding Casement Park.

As part of the initial work to be undertaken by the ICT on developing the brief and preliminary plans several planned public consultation events, including an open forum for the public in the area will take place over the coming months.  As a community based amateur sporting organisation it is the intention of the Project Board to also consult fully with the GAA in Ulster throughout the nine counties.  The ICT has extensive experience in public consultation and engagement on projects of this scale.

The ICT, under the leadership of Mott MacDonald Ltd as the lead partner, includes the full range of the required professional services including an architectural team led by world renowned lead designer and stadia specialists Populous with Consarc (Belfast Office), Planning Consultants RPS (Belfast based), Project Managers Gardiner and Theobald, and STRI –agronomists (pitch designers), who have recently worked on the Croke Park surface.

Following today’s launch of the ICT, work will immediately commence on the formulation of a design brief, the progressing of the community consultation and engagement process and preliminary design work.  The intention is to proceed with a formal application for planning permission by the end of March 2013.  The intervening period will involve intense work and activity by the GAA and the ICT in consultation with all stakeholders in order to ensure asuccessful planning application is lodged and to keep the project on track to meet the targeted completion date of September 2015.  Central to this period of activity will be the community consultation process and continued intense dialogue with NI Planning Service.

In introducing the Minister Chairman of the Stadium Project Board Tom Daly stated,“Today’s announcement marks the culmination of an intensive period of work over the past twelve months in order to meet this important milestone.  Securing the commitment of substantial funding from DCAL, on foot of an earlier commitment by the First and Deputy First Ministers, combined with the very substantial contribution from the GAA have been particular highlights.  The challenge is to now work in partnership with the community, all strands of the GAA and the statutory stakeholders to ensure that the vision for this magnificent new stadium for the GAA in Ulster can be achieved on time, within budget and to the highest quality standards.  Reaching the point where we have a world renowned ICT designing the stadium is very significant.”

Ulster GAA President Aogán Ó Fearghail welcomed the development saying, “A significant amount of work has been undertaken by the project board to bring us to this stage.  I am grateful to the Chairman of the Board Tom Daly, our Provincial Director Danny Murphy, supported by the project board and Senior Staff, who have brought us to this stage.  This development will help us realise our strategic requirement for a 40,000 all-seater stadium in Ulster.  The Ulster Council continues to support and endorse the work of the project board, who on our behalf, take this important project forward.”

The Director General of GAA Pauric Duffy outlined his satisfaction that the project had reached this stage and looked forward to seeing the project proceed apace.  He stated, “I am delighted to be present in Belfast for the announcement of ICT on my own behalf and also to represent the President of the Association Liam O’Neill, who is currently abroad on GAA business.”

In a message to those attending the launch GAA President Liam O’Neill stated, “The new stadium project at Casement Park is the largest and most significant GAA project to be undertaken since the redevelopment of Croke Park.  The entire Association welcomes the fact that the NI Executive have made such a significant financial commitment to meeting the strategic stadium requirements of the GAA in Ulster. This reflects well on the status of the GAA in the Province as a community based organisation focused on making life better for everybody and committed to all aspects of Gaelic Games and culture.”  He particularly acknowledged the role of successive DCAL Ministers, including current Minister Carál Ní Chuilín together with her department and Sport NI in making this day possible.

The Provincial Director of Ulster GAA Dr Danny Murphy acknowledged the contribution of all of the stakeholders involved in bringing the project to this stage., stating: “This is a significant day for the Casement Project and Ulster GAA.  A hard working team of people have put a lot of work into this process to get us to this milestone. I would like to pay particular tribute to the Stadium Project Board Chairman Tom Daly for his continued commitment to this project. I would also recognise the hard work and effort of the entire Stadium Project Board supported by our Senior Staff Team. I want to also acknowledge the Minister, her Department and Sport NI for their continued support in the development process which will see the realisation of Ulster GAA’s strategic stadium requirement. We now start a robust consultation process that will see us engage with the local community and other stakeholders to progress this important economic and social driver.”

Chairman of Antrim County Board Jim Murray commented, “It is very welcome news that we now have the Casement Design Team in place and ready to progress the ambitious plans for the redevelopment of Casement Park.  This project will be of significant benefit for Antrim GAA and we are very proud to playing our part in supporting Ulster GAA in the ongoing development process. I would like to thank Tom Daly and Danny Murphy for their continued hard work and effort in this process and I also acknowledge the input of the Minister and the department as we progress our new Provincial Stadium.”