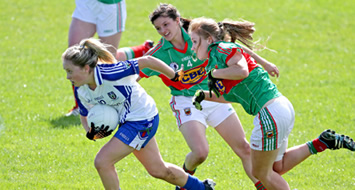 There will be at least two Ulster sides taking part in the Ladies’ Football All Ireland Finals Day in Croke Park on Sunday 30th September after Armagh and Antrim recorded semi final wins.

Ulster Junior Champions Antrim withstood a second half comeback from Wexford, winning by just a point 3-11 to 3-10 to book their place in their second junior final in three years against Louth.

Armagh secured their place in their first national decider since 2006 thanks to a fully deserved 3-9 to 1-6 win over Longford in the TG4 All Ireland Intermediate semi-final in Birr.

In the other semi final Fermanagh will play Waterford. So potentially there could be an all Ulster All Ireland final if Fermanagh are victorious.

A tally of 3-3 from attacker Cathriona McConnell helped National League champions Monaghan into the semi-finals of the TG4 Ladies Football All-Ireland Senior Championship with a win over Mayo at Dr Hyde Park.

Leading by six points at half-time, Monaghan responded well to a brief second-half resurgence from their opponents to finish strongly and book their place in the last four.

Things might have turned out very differently for Mayo had Aileen Gilroy goaled in the second minute, but instead her shot came crashing back off the crossbar and, while the same player did open the scoring with a point, it was the only time they led.