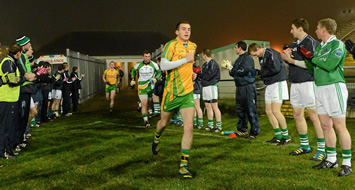 All-Ireland champions Donegal opened their 2013 campaign with an eight-point defeat to Fermanagh at a very foggy Brewster Park.

Jim McGuinness’s side, fresh from a team holiday in Dubai and starting with an experimental line-up that included five debutants, were 2-12 to 0-5 down at one stage of the second half before rallying to add a greater degree of respectability to the scoreline late on.

Given Donegal’s limited preparation, it was almost inevitable when Fermanagh scored their first goal in the fifth minute. Daryl Keenan took advantage of a defensive mix-up to beat Donegal keeper Michael Boyle.

Peter Canavan’s charges led by 1-6 to 0-4 at the break and the Erne men surged further ahead 11 minutes into the second half when Tomás Corrigan netted the home side’s second goal.

Donegal rallied, with Adrian Hanlon flicking to the net after a long ball into the Fermanagh defence, before Dermot Molloy added a second from 20 metres.

However, Fermanagh settled their nerves, with late scores from Marty McGrath and Seán Quigley securing a deserved win.