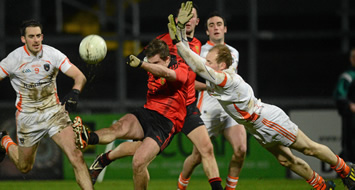 The final four have been decided in the Power NI Dr McKenna Cup, with Tyrone, Down, Monaghan and Fermanagh all sealing their place in the semi-finals.

Tyrone secured their progress by making it three wins out of three in Section C with a comfortable 1-18 to 0-9 victory over UUJ.

Jordanstown started well against Mickey Harte’s men, and led after 24 minutes, but Seán Cavanagh’s goal just before the break, followed by a few quick points, helped Tyrone into a five point interval lead.

They weren’t troubled in the second half as they added to this, and they will play Fermanagh in the semi-final this Sunday.

The other game in Section C was between Derry and Antrim, and they played out a thrilling 1-13 apiece draw in Celtic Park.

Derry led early on, but James Laverty’s goal put Antrim ahead before the break. They led by seven after 45 minutes, but Derry produced a superb comeback, and got within one when Danny Heavron found the net with 12 minutes to go.

The final few minutes were a real battle, but neither side could find the score which would have given them a chance of progressing to the final four of the competition as best runners-up.

James McCartan’s side were six points ahead at the break, with Kevin McKernan’s well taken goal helping them into that lead. They struck a second goal through Paul McComiskey 11 minutes into the second half. Armagh hit a late consolation goal through Declan Carville.

In Section A, Monaghan progressed to a last four showdown against the Mourne Men with a well deserved 1-12 to 0-7 win over Fermanagh in Inniskeen.

Monaghan were ahead after a low-scoring first half, 0-5 to 0-2, and they improved considerably in the second half as they added to their advantage.

Their goal came late on through Dermot Malone, but by then they had the match well and truly wrapped up, and new manager Malachy O’Rourke will be happy to have started his reign with such a strong showing in the January competition.

Fermanagh progressed to the last four despite the result, as they finished as best runners-up out of the three groups. They face Tyrone in the last four.

In the other game in the section, Donegal picked up their only win of the competition, beating college side St. Mary’s by a point, 1-14 to 2-10.