Home / Cavan and Donegal into U21 Final 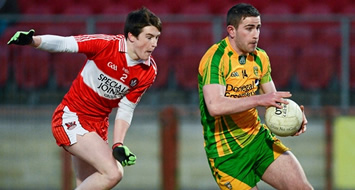 Cavan and Donegal will contest the Ulster U21 final on Wednesday, April 10 after winning their semi-finals.

Cavan are through to their fourth successive Ulster U21 final after a comfortable nine-point win over Down at the Athletic Grounds on Wednesday night.

The Breffni County completely dominated the first half, with Jack Brady hitting the score that gave them a 0-9 to 0-2 lead at the break.

The game was over as a contest when Paul O’Connor hit the back of the net within 30 seconds of the restart.

Enda O’Reilly hit a string of super scores for the reigning champions in the second half, while Down were reduced to 14 men in added time when Michael Hughes was sent off for a late tackle.

Donegal will play Cavan in the final on Wednesday, April 10 after overcoming Derry in a tight game played at Healy Park, Omagh. Donegal took an early 1-1 to 0-2 lead when Odhran MacNiallias fisted the ball to the back of the net after a pass from the excellent Patrick McBrearty.

With Christopher Spiers and Ryan Bell in good form from placed balls, Derry came back to lead before McBrearty leveled matters at 1-5 to 0-8 at the break.

Donegal snaffled a second goal shortly after the restart when Luke Keeney finished after another McBrearty assist.

The Oak Leafers made a real game of it in the second half, though, with two Bell frees reducing the gap to three points with five minutes to go. Spiers then added another for Derry before Bell hit the crossbar right at the death. In a nervy finale, Donegal hung on to seal a two-point win.

The Cadbury Ulster U21 Football Championship Final between Cavan and Donegal will take place on Wednesday 10th April at 8pm, venue TBC.