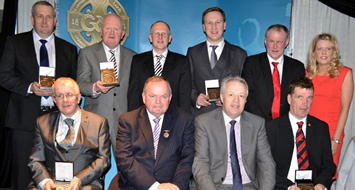 Ulster have featured strongly in the 2011 and 2012 McNamee awards which were presented by Uachtarán Chumann Lúthchleas Gael, Liam Ó Néill, at a function in Croke Park on Saturday 13th April.

These Awards, the GAA National Communication and Media Awards named after the late Pádraig McNamee, former President of the GAA, Chairman of the GAA Commission (1969-1971) and member of RTÉ authority. They are presented annually in recognition of outstanding contributions made by individuals and Association units in the area of media and communications.

The winners of the 2011 McNamee Awards are as follows:

Chosen because of the quality and extent of its content; a dozen writers were involved with extensive, quality photographic content to compliment the various articles in an excellent 16 page broadsheet publication.
The presentation of the package was first class, most attractively laid out to engage readers, and the inclusion of a young person’s section was an added plus.
This kind of publication is to be considered as the type of publication that will be retained in families for years to come; an appropriate souvenir of a great event in the history of Donegal GAA.

The 2011 winner of the Best Website Award is Louth GAA. (http://www.louth.gaa.ie)
Lauded for its clean, user-friendly design, and the ease at which it’s possible to navigate; it’s also very engaging for the fans.
Also scored highly for functionality; the TV channel, social media integration and inclusion of a county shop link was all highly impressive and all fit seamlessly into the design.
Overall, the site is a very engaging resource for both county & club fans.

The 2011 winner of the Club Project Award goes to Omagh St. Enda’s, who ran an incredibly well supported fundraising drive for the Palliative Care Unit at Tyrone County Hospital.
The breadth of support for the ‘Three Points One Goal’ St. Enda’s Trail concept; cycling from Galway to Omagh in July 2011, indicates that the project resonated within key aspects of what the GAA is about – community and co-operation. The quality of all materials connected with the project left all others in the shade to make them worthy winners.

The winning entry of the 2011 award for Best Programme goes to Séamus Woods and his teams efforts on The BT MacRory Cup Final.

The quality of design, high standard of editorial content along with the very competent use of photography is what made this match programme stand out from the rest.
It was very apparent that many painstaking days of effort were put in by the editorial staff in compiling the statistics and player profiles. Not just a great match programme, but a fantastic memento for all, including the hundreds of people mentioned throughout its well thought-out pages.

2011 Best GAA Publication – The Road To 51: The Making of Mayo Football

The winning photograph of the 2011 award goes to Paul Mohan for his photograph of Bryan Cullen raising the Sam Maguire aloft after Dublin beat Kerry in the All-Ireland Senior Football Championship final.

The photo brilliantly depicts the joy of a victorious sporting winner and the surrounding faces further enhance the nature of the event and the jubilation of such a victory.

Limerick’s struggle to make the breakthrough in the Munster championship is mirrored in the personal journey of Stephen Lavin through ten years of frustrated effort, culminating in qualification for the All-Ireland quarter-final last August – and recounted in The Sunday Times by Christy O’Connor.

As well as being a respected writer on GAA affairs, Christy is also a successful author, as reflected in the widespread commendation for his latest publication ‘The Club.’ The combination of high quality writing for which he is renowned and the narrative of Lavin’s personal quest for success make him a deserved winner.

Limerick 95FM’s one off show broadcast dedicated to the history of Na Piarsaigh GAA Club who had just won their first ever County Senior Hurling Final the previous October was a triumphant piece of GAA radio.

On the eve of their first ever Munster Senior Club Hurling final, the show’s producers really captured everything that encapsulates the spirit of a community and its club. With featured interviews with founding and current club members as well as characters from the locality, it was a touching tribute to those who went before and to those that will follow in their footsteps.

Thurles native, Michael Dundon is synonymous with Gaelic games and Premier County activity specifically and is still active on the GAA scene covering local games for the Tipperary Star, a paper he first worked as a trainee in 1963.
A former Thurles Sarsfields hurler, he brought his passion and expertise to bear on his coverage of games at all levels, not least those at inter-county level right up to All-Ireland finals over the course of many years.

Michael has been involved in the publication of 2500 editions of the Tipperary Star and served as editor between the years of 1987 and 2011 covering major successes for the county in that period.

The winners of the 2012 McNamee Awards are as follows:

The winner of the 2012 Provincial Media award is The Western People’s preview of the 2012 All Ireland Senior Football Final.

This 72 page tabloid supplement is a worthy publication capturing the importance of the event for the people of Mayo. Its scope, editorial content, quality of the writing, and pictorial content were excellent.

It combines expert match analysis of the big game with reflections on major games of years gone by and also reaches out to the Mayo Diaspora with articles outlining their viewpoint.

It was attractively presented, merging colour with black and white pictures tastefully, and is an ideal souvenir of the great memento.

The winner of the Best Website for 2012 was Killoe GAA (http://www.killoegaa.ie)
For such a small provincial club, there was an enormous amount of work put into the site and it gave the impression that the website, as representation of the club, is very much part of their community and important hub for their fans.

An example of their innovation involved was an assigned section for seniors, ladies and youth, ensuring the site was all-encompassing. The site encourages interaction and included a great mix of useful info, images and video. They have utilised social media to their advantage ensuring their fans have the latest team information at all times.

The winner of the 2012 Best Programme Award goes to Down GAA for their meticulous production of the Down GAA Football Senior Championship Final 2012 match programme.

An immense amount of credit must go to Down County Board PRO Paul Rooney and his editorial team whose obvious attention to detail at planning stage, along with strong adherence to design, resulted in a very easy-to-read, accurate and comprehensive publication that is not just a great source of match-day and county related information but a fine memento of the day.

The 2012 award goes to Sportsfile’s Stephen McCarthy for his photo of namesake, Michael McCarthy making his way from the dressing rooms to the pitch for the O’Byrne Cup game against Carlow at Dr Cullen Park.
The difference with this photo is that it’s prepared to explore opportunities other than those on the field of play.
It’s managed to produce a well constructed and imaginatively lit image of a player emerging from within, ready to do battle.

2012 Best GAA Publication Award – ‘The Cups that Cheered; A History of the Sigerson, Fitzgibbon and Higher Education Gaelic Games’ By Donal McAnallen

An excellently researched publication, for the first time ever Donal McAnallen’s book provides a comprehensive insight to the importance of third level competitions and the vibrancy of the GAA in this sector over a prolonged period.

It shows the players – both famous and those less known – in an excellent light for the role they played in establishing these competitions and the exercise is further embellished by some of the stories and insight provided away from the field of play.

Pat O’ Mahony’s excellent documentary on Stockholm Gaels gives an insight into the setting up, membership and running of what has become a unique development in the recent history of the association – an overseas GAA club, of which there are more than 300 in existence at present.

Stockholm Gaels is one of 50 clubs affiliated across 20 countries in Europe and as well as speaking to founding members and recent emigrants to Stockholm, the programmes follows the Gaels to the Finals of the Ladies and Men’s Scandinavian Gaelic Football Championships.

Daragh’s winning entry is a ‘good news’ story of Baltinglass and Wicklow footballer John McGrath’s recovery from leukaemia and his return to playing activity.

His vivid portrayal of the emotional turmoil for John and his family and the ultimate triumph of life evoke a ready-made response from the reader and distinguish it from the mainstream stories which feature in the sports pages of newspapers.

Tom O’Riordan, a successful athlete and Irish Olympian, penned articles for the Irish Independent since 1964 and for the next 38 years worked a staff journalist covering both Gaelic games and athletics.

A Kerry native, he had a bird’s eye view of his native county’s four in a row success and covered games the length of the breadth of the country, inspiring a love of journalism in his son Ian, who is a staff reporter for the Irish Times covering the same sports in the main.

Tom retired from his staff role in 2002 but continued in the years that followed to work as a freelance journalist and he retains a strong passion for Gaelic games.