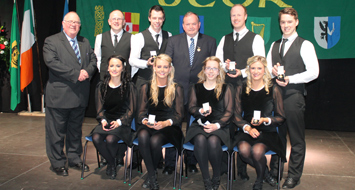 A tremendous season for Scór in Ulster reached its crescendo on Saturday (27 April), when the All-Ireland final of Scór Sinsear took place at ‘The Venue’, Ebrington, Derry City.

This was the first national Scór Sinsear final to take place in Derry City, and followed on from the successful hosting of the All-Ireland Scór na nÓg final at ‘The Venue’ in February. Once again a crowd bordering on two thousand people attended and were entertained by contestants from all four Irish provinces.

Ulster claimed only one title, courtesy of Omagh in the Céilí Dancing category (pictured). This constituted a record-breaking tenth All-Ireland victory by St Enda’s club in this grade. Otherwise Tipperary was the big winner on the evening, three of the eight titles – Solo Singing, Recitation and Set Dancing – being claimed by Premier County representatives. Roscommon acts won two categories, Ballad Group and Tráth na gCeisteanna. The Novelty Act honours went to Moate of Westmeath, and the Instrumental Music contest was won by Erin’s Hope (Coláiste Phádraig) of Dublin.

Great credit goes to the organising committee from Doire, and Áine Uí Choinn (Armagh) as Bean a’ Tí, for the smooth and successful running of the event.