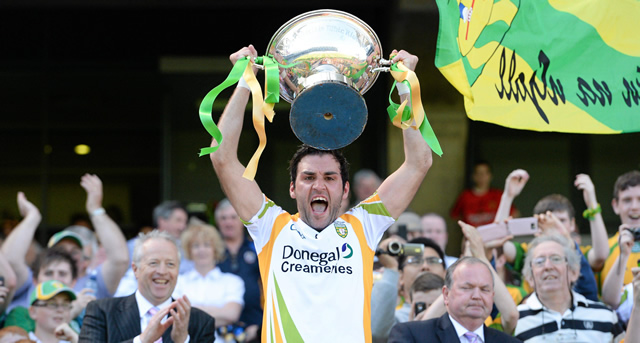 Fourteen-man Donegal came out on top in a thrilling Nicky Rackard Cup Final against Roscommon at Croke Park on Saturday afternoon.

Roscommon led through most of the first half, with Gerry Fallon (who finished with 2-7) to the fore, but a brace of second-half goals from Paddy Hannigan turned the game in favour of Donegal, who also had excellent performances from top scorer Lee Henderson and Danny Cullen.

Both teams hit some fine scores in a lively start, before Cathal Kelly flicked to the net in the tenth minute to hand Roscommon the advantage. With Donegal’s Lee Henderson and Roscommon’s Gerry Fallon both in accurate form from frees, there was little to separate the teams, as the Ulster men gradually got on top in the second quarter.

A brilliant goal by Seán McVeigh, at the end of a driving run, edged Donegal ahead on 28 minutes, but their lead didn’t last long, as Gerry Fallon smashed a free to the net to send Roscommon in with a 2-10 to 1-10 advantage.

The second half got off to an explosive start, as Paddy Hannigan found the net to bring Donegal level from the first attack, only for Roscommon to reply almost straight away through Gerry Fallon.

Despite having Ronan McDermott sent off, Donegal dominated the next 15 minutes, with Hannigan turning in his second goal and Henderson landing a string of fine points from frees and from play. Donegal went five clear inside the last 20 minutes, but points from Gerry Fallon and substitutes Niall Kilroy and Eamon Kenny kept Roscommon in touch.

The game was on a knife edge with just two minutes of normal time remaining when Fallon attempted to complete his hat-trick from another free, but his shot was blocked and Donegal secured victory with late points by Danny Cullen and Stephen Boyle.

Fallon had another shot at goal kept out in injury time as Donegal held firm to win a game that will live long in the memory.