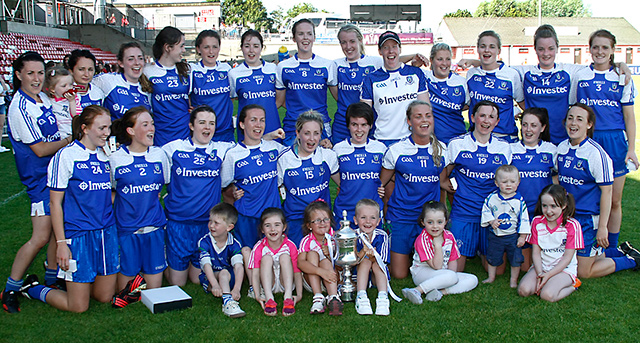 The magnificent Celtic Park hosted this year’s TG4 Ulster Ladies senior and intermediate finals on Sunday 14th July. The sun drenched venue was in excellent condition and the gaels from this year’s City of Culture pulled out all the stops to make finals day a wonderful success.

First up was the intermediate decider between Fermanagh and Down. The Erne girls had reached the final with an easy victory over Antrim while Down saw off a tough Cavan outfit to make the final. The Mourne girls had all the early play but squandered a number of good scoring chances but after trading early points it was Fermanagh who then scored the first of their four goals when Caroline Little found the net in the 9th minute. Sharon Little who missed the semi-final with a broken wrist was then introduced and in a four minute purple patch she goaled, set up her sister Caroline for her second and then watched full forward Noelle Connolly score the Erne sides fourth major, leaving the half time score 4-2 to 0-5 in Fermanagh’s favour.

Down had a spring in their step in the second half and by the end of the third quarter the Mourne girls had narrowed the gap to four points having hit five consecutive scores. In the final quarter and despite having Marcella Monaghan sin binned Fermanagh managed to outscore Down 6-4 and went on to win by six points, 4-8 to 0-14.

The senior decider saw reigning champions Monaghan put their crown on the line against a Tyrone side which had beaten favourites Armagh in the semi-final. However it was to be the Farney sides day as they romped to a 4-16 to 1-10 victory.

The first quarter was tight with the sides level on four occasions, however after that Monaghan stepped on the gas and Tyrone had no answer to their power and pace. In the 19th minute captain Therese Mc Nally scored the first of her sides four goals. Caoimhe Mohan who finished with a tally of 1-5 scored Monaghan’s second major in the 23rd minute to help her side to an interval lead of 2-6 to 0-5.

Monaghan were quickest out of the blocks in the second half and hit 1-7 on the trot. The goal was a penalty by goalkeeper Linda Martin after Cathriona Mc Connell was felled. The resultant incident also seen the first sin bining of the match as Mauara Mc Menamin was shown yellow. Midway through the half Monaghan were also reduced to fourteen players when Yvonne Connell was sin binned, however with the versatile Connell off the field Tyrone failed to capitalize. Monaghan corner back Christina Reilly then received her marching orders and Tyrone where thrown a small lifeline as Gemma Begley goaled shortly after. The Tyrone delight was however short lived as the Farney girls came straight back up the field and netted major number four, this time through Cora Courtney. There was now no way back for the red hand side and Monaghan went on to win their fourth consecutive Ulster crown by an impressive fifteen points.

Not only were the Intermediate and Senior Finals part of the family day out in Celtic Park, as between halves in each game the crowd were entertained by some brilliant mini-games displays from the many strands of Gaelic Games in Ulster including Gaelic4Girls, Gaelic4Mothers & Others and Special Needs.  Lord Mayor of Derry Martin Reilly and Ulster President Joe Lagan presented all participants with medals after their games with Joe adding “The mini-games have come to be an important part of our Ulster Finals day.  We are delighted to have teams from all over the province involved in them today and thank all the clubs and volunteers for their time and effort in making it possible.”  As well as this there was pre match entertainment provided by All Ireland Scór na nOg Champions Drumhowan and the National anthem was sang by Hannah Ferguson from Glen Maghera who was the Ulster Scór na nOg champion in 2012. 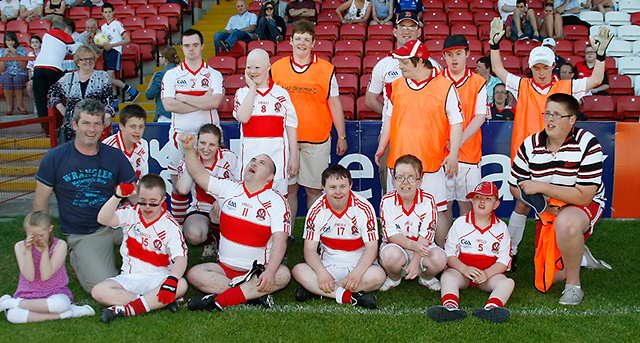 Pictured are the victorious Monaghan team who retained the Ulster crown for the fourth consecutive year and the Derry Special Needs team who entertained the crowd during the mini-games.