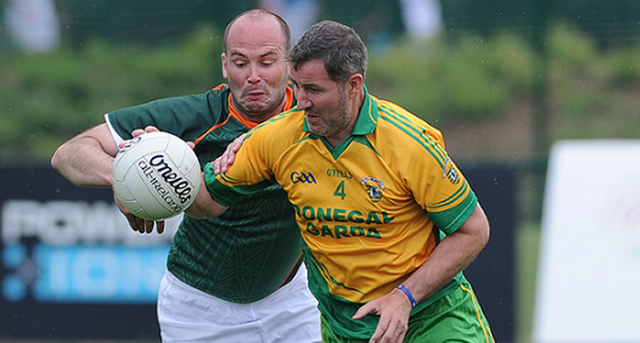 The over 35 Men’s (Masters) & the Ladies 18+ (Open) competitions got underway on the opening day of the World Police and Fire Games Gaelic Football competitions; with four teams competing in the Masters and four in the Ladies which included Carryduff GAC, a guest team from Belfast. The matches were shortened to 10 minutes a half due to the late start but no one objected as all matches were 7 a side and 10 minutes seemed like an eternity for some. Each team played each other with spectators being treated to some tremendous football. Fantastic sportsmanship was shown by all, but still all the games had the necessary bite to make them competitive, with the pick of the matches being the fantastic encounter between the Garda Ladies and Carryduff.

After the round robin matches the games moved down to the superb Arena Pitch at the Dub where a large crowd awaited the medal matches.

First up was a match between the NIFRS A and the NIFRS Stars in the Masters, these guys knew each other well and had played out a free flowing, high scoring match earlier in the day. This game wasn’t so open or high scoring but was played with huge intensity and once again NIFRS Stars surprised the fancied NIFRS A team to take the Bronze medal. The Masters final was a real gem of a match, the game was fast and tough with the Irish Prison Service pulling away a couple of times but as is typical of all Donegal teams their Garda squad kept coming back and at one stage looked like taking Gold but eventually their injuries caught up with them and the Irish Prison Service ran out deserved winners on the day.

In the Ladies competition the Donegal Garda took the Bronze, a fantastic result for them, having only formed for this competition, are now going to continue playing- a true legacy from the WPFG 2013. In the final the Garda GAA, also known as Brucies Banners proved too strong for the Irish Prison Service running out comfortable winners.

The first day of the World Police and Fire Games Men’s 18+ Gaelic Football open competition arrived with players competing on teams from across Ireland, Chicago, Canada, California and Australia in this two day competition. Round robin matches were played on the first day. The teams were split into two groups with the top two teams in each group playing the next day for Bronze, Silver and Gold Medals. The bottom two entered an Ulster Council sponsored Shield competition.

The business end of the competition took place on Thursday 8th August,first up on the Thursday was the Shield semi-final between Chicago Fire Department and Western GAA, the Chicago boys tried hard but were unable to match the classy Firefighters from Western Area (of NIFRS).  The final of the Shield was tough struggle for the PSNI B team against Western who had really got into their stride by this stage and scored freely, if they had shown this form the previous day then they could have easily been in semi-finals of the open.

The Garda played their counterparts from the PSNI in the first semi-final and proved too strong for the gallant PSNI team. The second semi-final proved to be a similar match with NIFRS stepping up a level from their earlier performances to beat the Cavan/Monaghan Garda. In the Bronze medal match the Cavan/Monaghan Garda rediscovered their fine form from the previous day and took the medal.

The two best teams had made it through, the weather was perfect and the stand was full, everything was set up for the final and what a final it was too; both teams produced what could only be described as a stunning exhibition of 7’s Gaelic, it was a classic. Teams traded scores and the lead changed on numerous occasions. With less than 7 minutes to go NIFRS missed a clear goal chance to go ahead and immediately the Garda went straight up the field to grab a goal of their own, effectively a 6 point turn around. The Garda then added a further 2-5 in the last 6 minutes to inflict a bigger margin than NIFRS deserved but ultimately the best team won in what will probably the best 7 a side game played this year.

The first Handball event of the World Police and Fire games started on Wednesday with the 1 wall competition being run in the Queens PEC. It was a first for the venue as two new one wall courts have been built through funding from the WPFG, Ulster Council & Queen’s University. These courts will now provide a legacy as they will be used by Queens Students and GAA Handball events for many years to come.

On the playing side Irish players struggled to cope with a strong team from Mexico, with Meath’s Tom Sheridan faring best when finishing runner up in the Men’s Singles to Mexico’s Jorge Alcantara in straight games.

Alcantara was back in Gold later that day when he teamed up with Alejandro Guzman to defeat countrymen Cruz Marquez and Centeno Alvaro in a closely fought men’s doubles.

There was some Irish success though with Monaghan’s Connor McDonnell taking Gold in the Masters Singles from Spain’s Luis Viltro; while the men’s Division 2 singles was an all Irish affair with all three medals on offer staying in Ireland. Anthony Donnelly from Limerick taking gold, with Desi O’Dowd and Colm Gregan taking Silver and Bronze respectively.

The World Police and Fire Games Four Wall Handball competitions took place from Friday 2nd to Saturday 3rd August with representatives from 6 countries playing, familiar names like Tom Sheridan of Meath, Conor McDonnell of Monaghan and Paddy Donovan of Laois led the Irish charge as they took medals home in almost every category. The Handball on show over the two days was of exceptional quality with new friends been made and great sporting battles been had.

GAA Handball would like to congratulate all who took part in the Games and especially those who took medals home. It was a very sporting and friendly event and by the end of the competition the Irish, Mexicans, Spanish and Americans had all become good friends.  There was some fine handball played throughout the competition, and much praise should go to the Mexicans and Spanish, who quickly adapted their style of play to cope with the Four Wall handball competition, within which they accounted for themselves very well and won Bronze and Silver Medals in the Mens B Singles Four Wall event.

There may have been a language barrier between the Irish and the Mexicans and Spanish, but there certainly was no barrier between the friendship and top quality handball played throughout the gruelling two days of handball.  Well done to the Police, Firemen and Prison Service personnel who participated, and to all the officials, volunteers and medical stafffor giving up their time to referee and oversee the event.