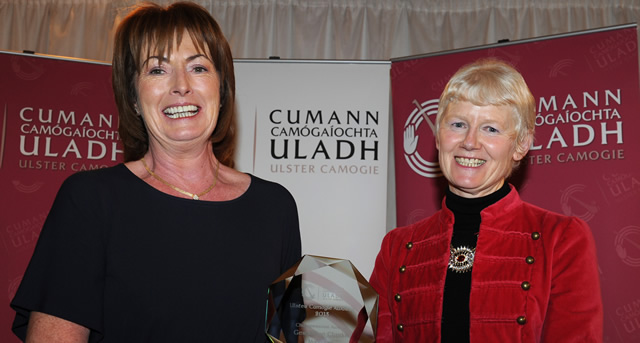 There were winners from right across the province in the 2013 NWP Recycling Ulster Camogie Awards Lunch which took place in Kelly’s Inn on Saturday 23rd November. These annual awards celebrate the dedication of our volunteers and administrators as well as the skills and performances of players across Ulster.

Ulster Camogie Chairperson Kathleen Woods paid tribute to those who give tirelessly towards the development of Camogie in Ulster. ‘Once again we meet to celebrate the Volunteers of Ulster Camogie those who love our game and the way of life that it gives us. Development of our game is only possible because of the commitment and dedication of  our army of volunteers who work tirelessly day in and day out, year in and year out to run our clubs, county boards and provincial council. On behalf of our players I thank and applaud each and every one of you’.

Uachtarán An Cumann Camógaíochta Aileen Lawlor was a special guest and presented the first three awards to Referee of the Year Rosemary Hughes-Merry of Monaghan, PRO of the Year to Down’s Veronica McGreevy and to Armagh who again sealed the Match Programme of the Year Award.

The strength of volunteers in Ulster was reflected by the standard of nominees in each category however Ursula Quinn who has stood down after 8 years’ service as Down Secretary was presented with the Administrator Award while Armagh’s Bebe Devlin was awarded Volunteer Award.

The final award which was the Chairpersons Award was presented to Geraldine Clarke of Monaghan. Geraldine is a truly fitting recipient as her dedication to camogie in club, county and province was recognised. Geraldine managed her club Clontibret to their first Ulster title winning the Bridie McMenamin Shield. Geraldine has served in almost all positions on the Monaghan County Board and also is the Chairperson of the Ulster Transfer, Hearings and Disciplinary Committee.