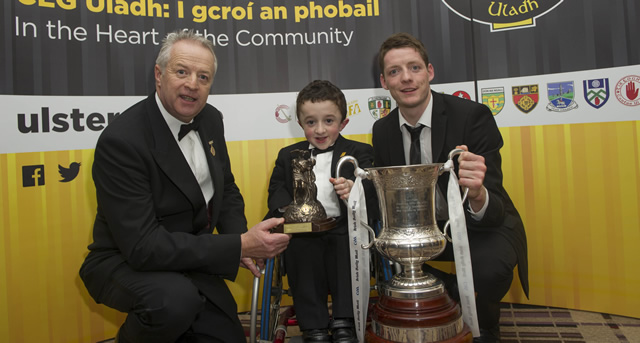 The Annual Ulster GAA President’s Awards took place in the Hillgrove Hotel Monaghan on Friday 29th November. GAA Volunteers from across the Province were recognised by Ulster GAA for their work in the areas of Coaching and Games, Refereeing and Education during 2013. The Ulster GAA Inter Provincial were also awarded their medals for winning the Inter Provincial Championship earlier in the year.

Pictured at the event are Ulster GAA President Martin McAviney with Monaghan All-Star Conor McManus and Ciaran McAleer (Errigal Ciaran GAA Tyrone) who recipient of the Young Ulster GAA GAA Person of the Year. Ciaran makes a significant contribution to his Club as an active committee member and administrator and was also recognised for his achievements at half time during yesterday’s Ulster GAA Senior Club Final in Omagh.

Service to the GAA through Education:
Liam Magee

Player of the Year:
Conor McManus