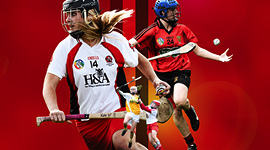 Pairc Esler played host to the 2014 NWP Recycling Ulster Camogie Championship Finals at the beginning of June. Derry were aiming to complete their first ever three in a row against a resurgent host side of Down in the Senior Championship while Tyrone were seeking to secure the Intermediate Championship after a couple of years of Finals heartache.

On the back of very strong league form Down defeated Antrim in the NWP Recycling Ulster Senior Championship Semi-Final in Portglenone with captain Niamh Mallon excellent for Down with a return to form following a cruciate ligament injury. This set up a decider against reigning champions Derry. In a very tense encounter Karen Kielt inspired Derry to a 2-08 to 0-11 victory that went right down to the wire.

In the NWP Recycling Ulster Intermediate Championship it took replays in each of their Semi-Finals and Finals to secure the Intermediate Championship after defeats in the two previous finals. Tyrone defeated Down’s second string at the second attempt in Ballyholland to set up a final against Cavan. This game was a fantastic game and with both sides scoring points in injury time it could have went either way.

In the replay Tyrone stepped up a gear with Niamh Gavin’s return from injury crucial as they ran out winners in Madden on a scoreline of Tyrone 2-11 Cavan 1-06.