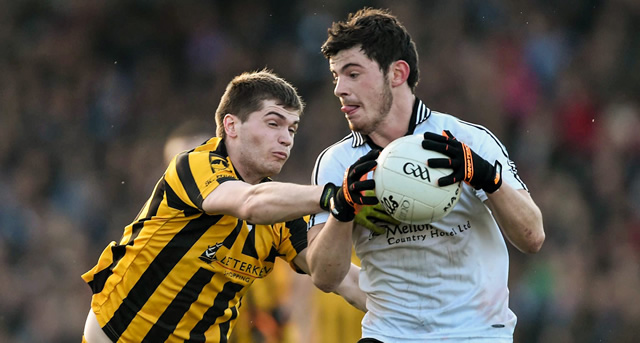 Omagh St Enda’s are through to a first ever Ulster club SFC final after surviving a nervous second half to book their place in the decider against Slaughtneil.

The Tyrone champions led by 1-5 to 0-5 at half-time, courtesy of Barry Tierney’s 24th minute goal, and managed to keep their noses in front despite not scoring for 22 minutes of the second half. St Eunan’s closed the deficit to within a point with seven minutes to go as the momentum shifted in favour of the Donegal champions.

Joe McMahon was forced off with injury midway through the second half and St Eunan’s completely took over in the middle of the field with Sean McVeigh and Conor Morrison points bringing them to within a point. However Omagh, who have finished strong in all of their championship games this year, held on with Conor McMahon scoring two late points.

St Eunan’s, who were playing their eighth championship game in eight weeks, hunted for an equalising goal in the closing minutes with Cillian Morrison blazing a good chance high and wide. Both sides finished with 14 men after injury-time dismissals, which had no impact on the game.

Caolan Ward was black carded for St Eunan’s and was sent-off having been booked earlier in the game, while Omagh midfielder Conan Grugan followed him for two yellow card offences. Omagh’s pace on the counter-attack and slick passing game meant they fully merited to their half-time lead.

Despite having two men marking him at all times, O’Neill scored three points from play in the opening half hour, two of them from the tightest of angles. Morrison was making his first start in four years due to his soccer commitments with Cork City and he capitalised on getting early ball in with two points in a minute to put St Eunan’s 0-3 to 0-2 ahead after eight minutes.

It was the only time they led in the first period, but despite having their noses in front for most of the half, Omagh’s dominance was not really reflected on the scoreboard. A superb threaded pass from Aaron Grugan set up Cormac O’Neill for a good goal chance after 13 minutes but his shot was well saved by Patton.

Omagh’s ability to find an unmarked player and move the ball quickly set up Tierney for goal chance number two after 22 minutes. Stephen Mullan and Connor O’Donnell combined with Tierney sliding in to connect with Mullan’s pass across, but somehow the ‘keeper blocked the goal-bound shot.

Two minutes later, Tierney’s low finish after a lovely weighted pass from Ronan O’Neill gave Omagh a useful three-point cushion which they still held at the end of the game. Scores were hard to come by in the second half and Omagh became too defensive after Jason McAnulla’s point immediately after the restart put them four points up.

They retreated into their own ’45’ as they attempted to defend a lead and once McMahon went off, Rory Kavanagh and John Haran’s influence grew around the middle. Cillian Morrison had a point disallowed for a wide while Omagh spurned a fourth goal chance when Ronan O’Neill’s shot was blocked by Darragh Mulgrew.

Conor McMahon’s late points were vital in relieving the pressure on Omagh who face Slaughtneil in the final on November 30. 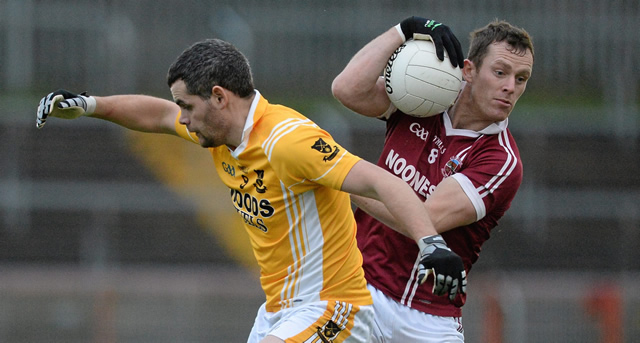 Slaughtneil are through to their first ever Ulster Senior Football Club Championship final where they will face Omagh St Enda’s, after seeing off the challenge of Clontibret at Healy Park on Sunday.

The Derry champions led 0-5 to 0-3 at the end of a low-scoring first half, and then found the net shortly after the restart through Christopher Bradley. That score put them firmly in control of the game, and they never relinquished it.

They started off brightly in Omagh, hitting the first three points of the game through Ronan Bradley, Paul Bradley and Cormac O’Doherty, before two points from Clontibret’s Conor McManus had the Monaghan champions within one at the end of the first quarter.

Slaughtneil were two up at the interval, and scoring chances were at a premium for both sides. That’s why Bradley’s goal after the restart was so vital – his finish to the bottom corner of the net put Slaughtneil five clear, and Clontibret were always going to struggle to register enough scores thereafter, given their reliance on McManus’ frees.

The Monaghan star did keep his side in touch with some excellent shooting from placed balls, but his influence from play was negligible, and Slaughtneil held off Clontibret in the closing stages – finishing off with some excellent scores from Paul Bradley – to cruise into the final, which will take place on November 30.