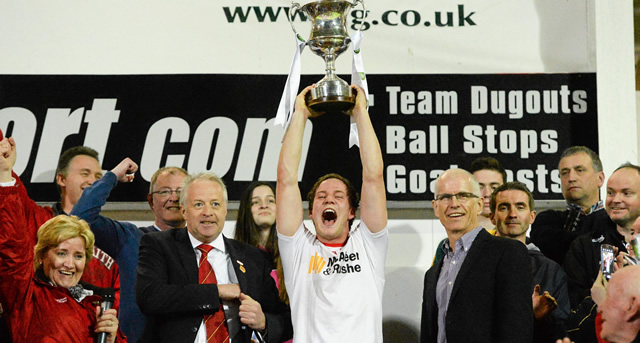 Tyrone ended a nine-year wait for an Ulster U21 FC title with Daniel McNulty converting a last gasp free in Celtic Park to break Donegal hearts for the third year in a row.

Donegal, runners-up to Cavan for the last two years, played poorly but reeled off three unanswered points in the last ten minutes to draw level and looked to have the winning momentum. However when Tyrone senior player Cathal McShane was fouled by Ciaran Thompson, McNulty stepped up to nail the 30m free.

Tyrone were the more assured side and Conor Meyler’s eighth minute goal gave them an early cushion that they held on to for most of the game. In front of 3,239 supporters, Meyler grabbed the crucial score of the opening half.

Ruairi McGlone’s strong run through the middle drew a couple of defenders to him and he slipped the ball out to Meyler, who rode the tackle and drilled the ball low across the goalkeeper into the far corner of the net. It was the Omagh’s man second goal in as many matches and gave Tyrone a cushion they held onto until half time.

Both sides looked comfortable breaking forward and Lee Brennan scored a couple of superb left-footed points, one from a very difficult angle before the break. Ryan McHugh was involved in a great Donegal move, his good run and superb pass to Darach O’Connor resulting in an impressive score.

Ciaran McLaughlin picked up a black card for the second game in a row in the 28th minute and McFadden nailed the free to cut Tyrone’s led to 1-4 to 0-6. However the Red Hands hit two more points before the interval from Michael Cassidy and Brennan to regain their three-point lead.

After a poor first half, Donegal made two half-time substitutions to try and inject some urgency into their play and Willie Gillespie and Hugh McFadden did post scores early in the second half. Tyrone full-forward Daniel McNulty had a goal disallowed for over-carrying, but he converted a long-range free in the 39th minute to restore Tyrone’s three-point advantage.

Hugh McFadden had a mixed night with his free-taking, kicking five wides, but he nailed a couple of important ones to keep Donegal in touch in the third quarter. Ruairi McGlone capitalised on a poor Donegal kickout to score a point and McNulty’s great catch and turn led to his first from play to leave Tyrone three points up with ten minutes remaining.

Donegal had their best spell of the game in the last ten minutes, hitting three unanswered points from Eamon McGrath, Darach O’Connor and sub Stephen McBrearty hit the equaliser in the last minute of normal time.
Mark Kavanagh was black-carded for Tyrone in a dramatic finish.

With the game looking like it would go to extra time, Tyrone mounted one last attack and McNulty stepped up to convert the free which booked Tyrone’s place in the All-Ireland semi-final against Roscommon on Saturday week.