Home / Companies Battle it out to be Ulster Inter-firms Champions 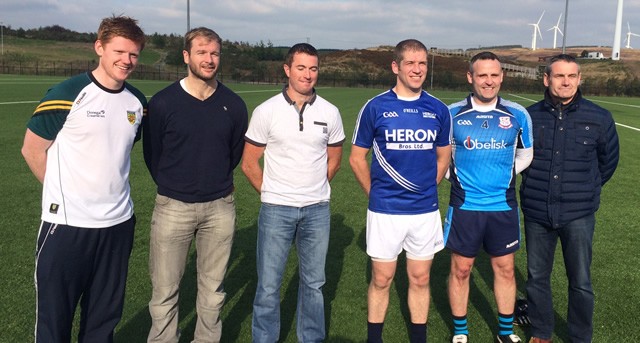 The 2015 Ulster Inter-firms Championship will reach its conclusion this Saturday 14th November at the Tyrone GAA Centre of Excellence in Garvaghey, near Ballygawley.

The first group match is at 12pm with the finals scheduled for 3pm. The qualifiers from the Eastern and Western Group stage will compete in a round robin series with the two teams who have accumulated the most points meeting in a final game.

Qualifiers from the Eastern Group include the Fire Service, Northern Ireland Solicitors and Citigroup. Kingspan and Heron Bros qualified from the Western Group to reach the final stage. The names of many players involved this Saturday will be familiar to GAA fans having played at the highest level. Newcomers to the competition, Kingspan, will prove a tough team to beat having topped the Western Group having players such as former Monaghan player Tommy Freeman and former Kilkenny Hurling All Star JJ Delaney. Heron Bros have Tyrone All Ireland winner Kevin Hughes pulling the strings for them at midfield. The Fire Service includes Down player Peter Turley as well as recent All Ireland Masters winner Mark Donnelly in their ranks. The Northern Ireland Solicitors have a strong team with Cathal Carville being their chief scoring threat. Reigning Ulster Inter-firms Champions, Citigroup have been dealt a blow to their hopes of retaining the title with Derry player Oisin Duffy being unavailable to them due to a club game.
Other companies playing on Saturday include First Derivatives, Obelisk and Pramerica who will battle it out in a bid to win the Ulster Interfirms Shield competition.

Tournament organiser, Martin Kennedy is delighted to see the growth of the competition:
“Ulster Inter Firms GAA continues to grow year on year. 10 teams competed in Ulster this season with 5 of these being first time entrants. 2 teams then have the opportunity to progress to the All-Ireland semi-final stage (1 junior, 1 senior) which takes place in Feb or March. The competition caters for players of all abilities, and includes senior inter county stars and those who can no longer commit to club football for various reasons.”

Ulster GAA President, Martin McAviney, commented “The InterFirms Championship is a prestigious competition. Indeed, many of those involved are members of the Association across Ireland. Ulster GAA is delighted to work with the organising committee to provide these games. On behalf of Ulster GAA, I wish all competing Companies good luck as they seek to win the Ulster Competition.”