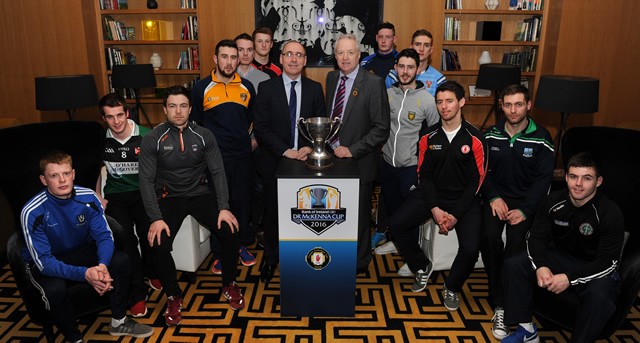 The official competition launch and draw for the 2016 Bank of Ireland Dr McKenna Cup took place on Tuesday evening at the Fitzwilliam Hotel, Belfast.

The event was attended by an outstanding array of players and management team members from each of the competing 9 County and 3 College Teams, as well as a very considerable media prescence. In a first for Ulster GAA, the entire event was streamed live via Linwoods Armagh TV.

The draw was conducted by Ulster GAA President Martin McAviney and Terry McCrudden on behalf of competition sponsors Bank of Ireland, and dealt up the following:

Speaking at the launch, Ulster GAA President Martin McAviney said:
“The Bank of Ireland Dr McKenna Cup throws in on the first Sunday of the New Year and we are looking forward to a busy month of action, which will see the games coming thick and fast right up until the Final on Saturday 23rd January.

We have had record attendances at the Bank of Ireland Dr McKenna Cup over the last four years and we would be encouraged by the huge attendance at tonight’s launch that this trend of increasing interest in the competition will continue.

Finally I want to thank the team at Bank of Ireland for their continued support for this competition, and indeed their support for the GAA at all levels throughout the Province, and I look forward to continuing our relationship with them into another Bank of Ireland Dr McKenna Cup in the New Year.”

Terry McCrudden, Bank of Ireland, Head of Branches, East Retail NI. said:
“We are delighted to be part of the Bank of Ireland Dr McKenna Cup. The competition is a great opportunity for people to come together and for teams to show their skills. Bank of Ireland is proud to support a range of sporting events across Northern Ireland to encourage competitive spirits among young people throughout our community.”

The fixtures for the 2016 Bank of Ireland Dr McKenna Cup sections will be drafted at the next meeting of Ulster CCC on Tuesday 8th December.

Ulster GAA are again selling a limited number of competition tickets for the 2016 Bank of Ireland Dr McKenna Cup.

This will permit you access to Round 1, Round 2 and Round 3 games involving your team, both semi finals and the final for just £20/€25… that’s a potential saving of over 60%!

For more information, or to purchase your competition tickets now, visit www.ulster.gaa.ie/mckennacup2016