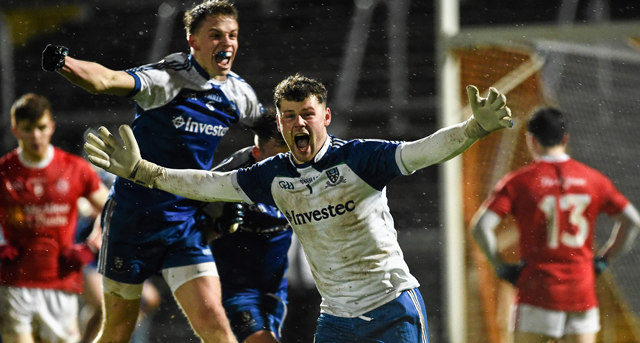 A strong second-half from Monaghan earned them a first EirGrid Ulster U21 FC title since 1999, dumping out defending provincial and All-Ireland champions Tyrone at the Athletic Grounds.

It completed the ‘double’ for this Monaghan team, who also defeated Tyrone in the 2013 Ulster minor final, and they were deserving winners with Barry McGinn top-scoring with 0-6, five from frees.

Tyrone led by 0-7 to 0-6 at the break, but Monaghan hit five of the seven points scored in the third quarter to take complete control and then they saw it out to claim only a third ever Ulster title at this grade.

In front of a 4,332 crowd the teams were level five times in the opening half.

Tyrone had their noses in front at 0-7 to 0-6 at the break, with precocious talent Lee Brennan scoring five points.

He converted a wonder score sideline ball from inside the 13m line with the outside of his left boot in the 17th minute and also scored from distance with his right foot.

Monaghan suffered a blow when captain Kevin Loughran was black carded after 28 minutes, but Barry McGinn landed 0-3 in the opening period, two from frees, while Fergal McMahon and Conor McCarthy also scored from play.

Monaghan ‘keeper Conor Forde pulled off a superb double save from Sean Fox in the sixth minute, showing great reflexes to jump up and make the second save from close range in the only real goal chance of the first half hour.

Monaghan owned the third quarter, dealing better with the greasy conditions with some Tyrone players struggling to get to the pitch of the game.

The Farney county opened up clear daylight between the teams for the first time scoring five of the seven points scored in the 15 minutes after the break.

Barry McGinn nailed two frees while Conor McCarthy scored a long-range point with the wind at his back, cornerback Barry Kerr also scoring as Monaghan led by 0-11 to 0-9 midway through the second period.

Monaghan failed to score for 14 minutes, but another McGinn free settled their nerves and restored their three-point lead.

Tyrone rallied in the last five minutes with points from Cathal McShane and David Mulgrew, but some poor decision-making cost them when hunting for an equaliser and substitute Adam Treanor clinched it for Monaghan with the insurance point deep into injury time.