“The Ulster Schools’ All-Stars is a fantastic celebration of GAA youth and something that we at Danske Bank are extremely proud to be part of.  The commitment and dedication required to be even nominated for an All-Star award is immense, and I would like to congratulate all of the players who were selected to participate in the trials, as well as the 15 outstanding hurlers we are honouring here today.

“This passion for excellence is truly commendable and we are delighted to support the players here today and all who are a part of the Ulster Schools GAA.”

Jimmy Smyth, Chairman of the Ulster Schools’ GAA, also congratulated the recipients. “To achieve an Ulster Schools’ All Star Award is to rightly earn a place in hurling’s Hall of Fame. These awards recognise and reward these talented players’ prowess, commitment and endeavour on the hurling field.”

The Hurling awards will be officially presented at a Gala Banquet at the end of March 2017, while the Danske Bank Ulster Colleges’ Football All-Stars will be announced later today (WEDNESDAY). 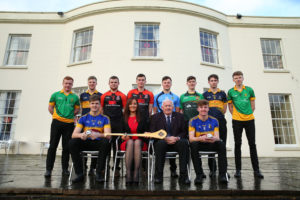 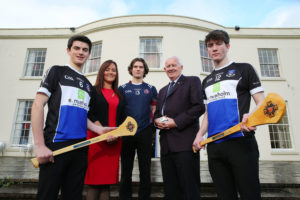 Sean is the first player from his school to gain recognition in the All-star scheme. A dual-player, he won Danske Bank MacNamee and Leonard Cup medals while a student in St Patrick’s Maghera.

With Kevin Lynch’s he won an All-Ireland Féile nGael title in 2014, and Derry under 14, two under 16 and a minor hurling title.

Tom has captained Our Lady’s & St Patrick’s Knock to the Danske Bank Kirk and Casement Cups and also holds two McFarland Cup medals. He has represented Down at under-age level winning All-Ireland under 14 and 16 medals.

With his club, Tom has won an Ulster Féile na nGael title and a Down minor hurling league medal.

Corey was part of the Cross & Passion Ballycastle team that won the 2014 Mageean Cup and progressed to win the Paddy Buggy All-Ireland title in April 2015. He has won two Ulster Minor championship medals with Antrim and was part of the Ulster Elite hurling squad. He has also represented his school in football.

In 2016 Conor captained Dunloy to the Antrim minor championship double in football and hurling and last month lifted the Ulster club title. He has numerous other county titles at underage level.

At club level he has won two Minor championships and last month an Ulster minor title. Ryan plays his football with All Saint’s in Ballymena and has won an All-Ireland Féile title and a Breslin Cup.

Ryan also holds a bronze medal for the 1500m in Ulster athletics.

Conor was part of the Cross & Passion Ballycastle team that won the 2014 Mageean Cup and progressed to win the Paddy Buggy All-Ireland title in April 2015. He has also represented his school in football, winning a Danske Bank Ennis Cup.

He has won three Ulster Minor championship medals with Antrim and was part of the Ulster Elite hurling squad.

Aodhán holds a complete set of Ulster schools’ medals, having been part of a group of players that won every title through their school careers

This year he played on the Antrim minor team that won the Ulster championship and Leinster league titles.

Ed has also represented St Killian’s in football and golf.

School : St Mary’s CBGS, Belfast
Club: Naomh Eoin, Belfast
CJ holds a complete set of Ulster schools’ medals, having been part of a group of players that won every title through their school careers. He was joint-captain (with twin brother Odhrán) of the Mageean Cup winning team. A dual-player, he has represented his school at all levels, including MacRory Cup.

CJ has won Antrim titles at all levels with his club including recently the under 21 double. He was also part of the Antrim minor team in 2015 that won the Ulster title.

Peter holds a Danske Bank Casement Cup medal from 2015 and has played football for his school as well.

He has represented Down at under-age level winning All-Ireland under 14 and 16 hurling medals and has played minor hurling and football for his county.

With Carryduff, Peter has won Down under 14 and under 16 league and championship titles.

Daniel holds a Danske Bank Foresters’ Cup medal with his school and has played in MacNamee and Mageean Cup finals.

This year he played on the Antrim minor team that won the Ulster championship and Leinster league titles.

Daniel plays football for the Con Magee’s club at minor and under 21 level.

Paul has represented his school at all levels in football and hurling winning two Danske Bank Leopold Cup titles, and a Casement Cup a couple of weeks ago when Paul scored ten points in the final against Rathmore Grammar.

At club level he has won championships at Féile na nGael, under 14, 16 and minor levels as well as an Armagh under 16 football title.

Ronan is only the second Aquinas hurler to win an All-star, the first was his brother Conor four years ago. A dual-player, Ronan has won a Danske Bank Maguire Cup title with Aquinas.

He has represented Down at under-age level winning an All-Ireland under 14 and two 16 hurling medals and with Bredagh has championship medals at Féile, under 14, 16 and minor level in hurling and an All-Ireland Féile football medal.

School : Rathmore Grammar
Club: Sarsfields, Belfast
Donal was selected at midfield in last year’s team and is winning his second All-star. He captained Rathmore to both the Danske Bank O’Mahoney and McGreevy Cup titles and won two Ulster minor championship medals and a Leinster minor league medal with Antrim.

Donal has also won the Antrim and Ulster poc fada titles twice and the All-Ireland title once. With Sarsfields, he has won a Féile title, and south Antrim under 16 and Senior reserve titles.

Peter is the fourth All-star from Coláiste Feirste. Peter has won Ulster titles with his school in both hurling and football and has represented Antrim at all levels winning an Ulster minor title in 2016.

With Naomh Eoin he has won double (hurling and football) championships at under 16 and 21 levels.