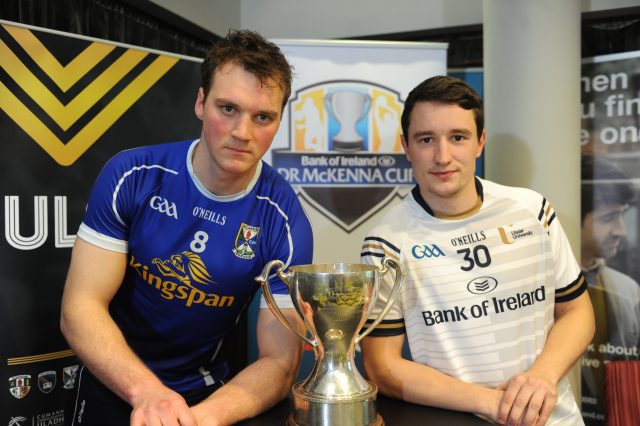 The official competition launch and draw for the 2017 Bank of Ireland Dr McKenna Cup recently took place at the Fitzwilliam Hotel, Belfast.

The event was attended by a very strong line up of players, management & officials from the twelve competing teams, as well as a large number of media personnel. The event was streamed live to the Ulster GAA Facebook page in partnership with the team at Linwoods Armagh TV.

Down V QUB at RGU Downpatrick

Down V Derry at Pairc Esler

Armagh V Down at Athletic Grounds

Speaking at the launch, Ulster GAA President Michael Hasson said:
“The Bank of Ireland Dr McKenna Cup throws in with Round 1 fixtures on Sunday 8th January with four additional rounds of games over the following twenty days until the final on Saturday 28th January.

Although the competition takes place very soon in the New Year, the large attendances in recent seasons have shown that our supporters cannot wait to see their teams back on the field of play.

With the competition entering its 90th year, I would like to again thank our sponsors Bank of Ireland for their continued support at this and all levels throughout the Province and we look forward to working with them to deliver a very successful 2017 competition’’

“We are delighted to be part of the Bank of Ireland Dr McKenna Cup. The competition is a great opportunity for people to come together and for teams to show their skills.

Bank of Ireland is proud to support a range of sporting events across Northern Ireland to encourage competitive spirits among young people throughout our community.”

Ulster GAA are again selling a limited number of competition tickets for the 2017 Bank of Ireland Dr McKenna Cup.

This will permit access to Round 1, Round 2 and Round 3 games involving your team, both semi-finals and the final for just £20/€25… that’s a potential saving of over 60%!

For more information, or to purchase competition tickets, visit here.