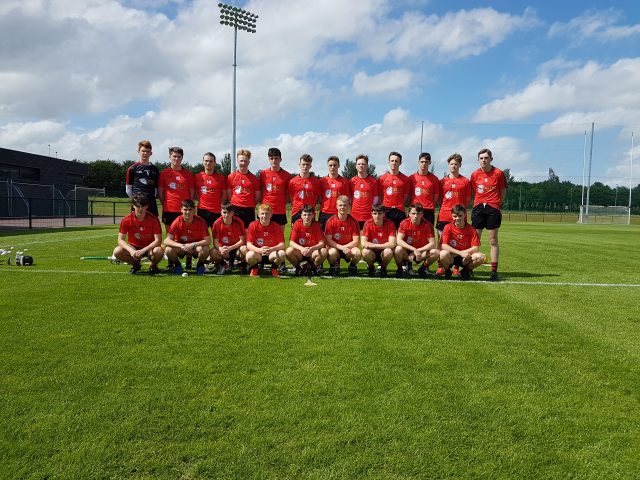 Down have made it through to the semi final of the Corn William Robinson, Division 3 of the Celtic Challenge, after a thrilling encounter against Cork City on Saturday June 10th.

The pivotal moment of the game came less than one minute into the second half. Leading by four points, 1-9 to 1-5 and having had the benefit of a strong, forceful wind Down desperately needed some breathing space in preparation of the expected Rebel fight back, when Stuart Martin pounced on
a saved rebound and flashed the sliotar past a helpless Donal Maher in the Cork City goals for his second major of the day.

At times, this contest got a bit feisty, but with an All-Ireland semi-final the prize for the winner, this was championship hurling worthy of any Munster or Leinster clash. Down struck the opening score of the game through Ronan Costelloe and within the next minute had two further points through Phelim Savage and Ronan Blair. Cork City struck back through Blake Murphy, two from play and a pointed free to level the match.

Ronan Blair at centre-half forward was tormenting the Cork City lads with his direct running approach feeding the sliotar out to Tim Prenter and Ronan Costelloe, two forwards capable of opening up the Cork rear guard if they were allowed into the danger zone and as a result Cork started to concede frees which Blair gladly knocked over to give his side a two point lead. Over the next six minutes Cork City hit a purple patch with the intensity of the game starting to bubble through to the surface and hit the lead for the first time when Blake Murphy unleashed a bullet from outside the 21m line passed Eoin McCrickard. Any other team could have crumbled at this point as the city lads were starting to get the measure of their Ulster opponents dominant style of hurling and tacked on a further point through Derek Feeney midway through the half.

Blair responded with another free after Savage had been fouled after fielding magnificently in mid-air. Shortly afterwards Savage’s persistence paid off when he finished to the net as Down took the lead with the slenderest of margins, a lead they held onto until the final whistle. Phelim Savage was giving a masterclass in midfield mastery, reminiscent of his father Gary in Downs glory years of the 90’s. Matt McAreavey, having just returned to the squad from injury along with Billy Campbell & Ronan Murphy in Downs rear-guard had the unenviable jobs of keeping Cork City & Na Piarsaigh dangermen Blake Murphy, Derek Feeney of St Vincents and Blackrocks Emmet Sheehan at bay. Cork City relied on Murphy and Feeney as their outlet for scores, but Matt, Caolan and Billy were quick to close down and pressurised the Cork lads as they probed for a chink in the Mourne defensive unit. Down added three points over the remaining eight minutes through Blair (a free), Joe Hanrahan & thumping seventy metre free from Ciaran Watson to close out the first half with Cork City ready to reverse the tables in the next thirty minutes.

Down got the dream start they wanted in the opening seconds of the 2nd half through Stuart Martin and before Cork City had time to adjust themselves, Down had grabbed two further scores, as Blair and Hanrahan increased the lead to nine points. Blake Murphy once again pointed for Cork City, when just as things looked rosy for the Ulster lads, disaster struck. Ronan Blair, who’d been having an excellent day on the park and was also helping to sweep up in defence took a bad injury to his left knee when he landed awkwardly having contested a high ball on Down’s 45m line. The game saw a ten-minute delay until he was stretchered off the field. Unfortunate an accident as it was when play resumed Down supporters feared the loss of such an influential player could have disrupted the rhythm of the side with still over twenty minutes to play.

Tim Prenter and Stuart Martin steadied the ship as Down added another two points. Down had a momentary lapse on fourteen minutes when a high floated ball from Derek Feeney dropped in to the goalmouth and the unsighted McCrickard desperately tried to defend the sliotar as it made its way into the net. Three minutes later saw Wayne Flood loft over a close in free for Cork City. But almost straight from the puck out the sliotar was being picked out of the Cork City net as Ronan Costelloe had found himself with just Donal Maher to beat.. he made no mistake, goal! Down even had the luxury of having a Cathal Coulter penalty saved after Tim Prenter had been pulled back with just the keeper to beat a minute later. Down managed one last score, as Prenter’s hard work to shake off the shackles of his opponent was rewarded with a sweet point.

There was still ten minutes left with Down leading by nine, Cork City desperately peppered the Ulster sides half back and full back lines trying to draw frees in a vain effort to cut the deficit, but all they could manage was one more final Blake Murphy pointed free as Down threw their bodies on the line to thwart any potential Cork City goal attempt. When Antoin Keating blew the full time whistle the delight in the Down camp was clear to see as they had achieved what no other Down team has managed, to beat a Rebel county side for the first time.

Down now progress to the All-Ireland semi-final of the Corn William Robinson next week with a meeting of either East Waterford, Limerick city or Dublin Plunkett.

Referee Antoin Keating and his officials awarded the Best & Fairest award to Ronan Costelloe of Down and Blake Murphy of Cork City.