Cavan and Derry are through to the Electric Ireland All-Ireland Minor Football Championship Semi Finals after their respective wins in the quarter finals at the weekend. 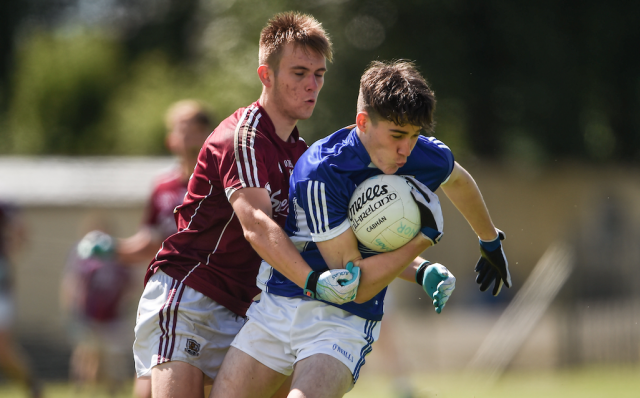 A magnificent final quarter from Cavan, during which they out-scored Galway by 1-5 to 0-1, helped the Breffni lads into their first All-Ireland MFC semi-final since 1974.

Galway led by the odd point in 11 after what was a lacklustre, stop-start first half during which ref James Bermingham dished out four yellow cards and one black – the final tally was six yellows and two blacks – and the Connacht champiosn generally were the better side.

It took Cavan 15 minutes to register their first point through Oisin Pierson, by which stage they had already shipped three at the other end from Padraic Costello, Darragh Silke (free) and a great strike from Matthias Barrett.

Within seconds of opening their account, Cavan added another from Tiernan Reilly, which was cancelled out by Conor Campbell.

Another Silke free made restored the three-point gap before Cavan enjoyed their best spell, Ruairi Curran kicking two excellent points and Philip Rogers adding another before a Costello rounded off the first-half scoring.

Galway, for whom full-back Sean Mulkerrin and centre-forward Liam Silke impressed, kicked on in the third quarter, two Silke frees and a super Evan Murphy effort extending their lead to 0-9 to 0-5.

Man of the Match Cian Madden kick-started the revival with a fantastic point and although Costello responded with a free, another fine Madden effort and two from his clubmate Pierson (one free) made it a one-point game.

Silke capitalised on an error at the back by Cavan but the Ulster side weren’t done yet and after wasting a good goal chance, they created another and Pierson smashed it to the roof of the net as they took the lead for the first time.

In the closing stages, Madden conjured a majestic score and then tacked on a free as Cavan recorded what looked, with 15 minutes to go, a most unlikely win. 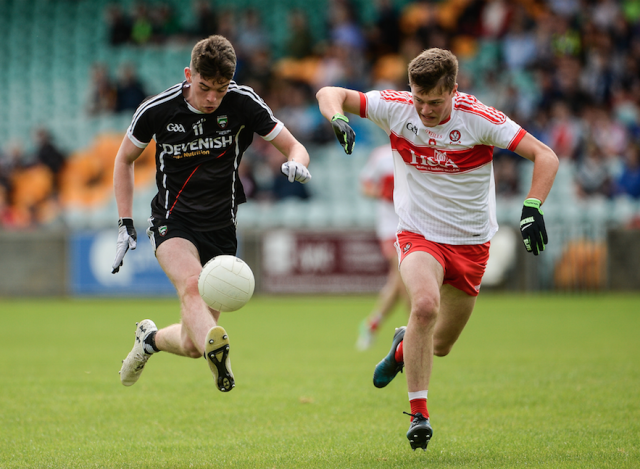 Derry go through to the All Ireland Minor Football Championship semi-final after a thrilling, one point quarter-final victory over Sligo at MacCumhaill Park, Ballybofey.

Paddy Quigg was the late, late hero for Damin McErlain’s team with an injury time point to finally kill off the challenge of an excellent Sligo side who had fought back from three points down to level the game as it ticked into five minutes injury time.

Derry went into the game a pre-match favourites but it took a brilliant second half display and a fantastic Richie Mullan goal to turn things around after Sligo, with Red Og Murphy superb, threatened to upset the form book in the opening 30 minutes.

Murphy hit 0-11, including seven from frees, but it still wasn’t enough as not for the first time this season, McErlain’s young team found the mental reserves to win a game that looked to be going away from them.

Trailing by five, three points inside three minutes from McWilliams, Quigg and substitute McErlain changed the complexion of the game and left Derry only two behind at 0-11 to 0-9 in the 37th minute. That was the start of a eight point swing that took Derry from five down to three up.

A McWilliams free closed the gap further before the game’s crucial score, that goal from the livewire Mullan. It owed everything to Tiarnan McHugh though.

The big Drumsurn forward was second best to a high ball forward on the right wing but shrugged off Brian Cox to make the ball his own before feeding Mullan who arrived off the shoulder at pace to stride forward before firing a superb low finish past Davey for a 1-10 to 0-12 lead.

Odhran Quinn added a lovely score and when Quigg stretched the advantage to three points at 1-12 to 0-12, Derry finally looked in control but Sligo weren’t finished.

Corner forward Cian Brett grabbed a point before an innocuous looking challenge brought Murphy his 10th score of the day from a 48m free to leave one between them with two minutes left. Derry were denied a blatant free in the attacking zone and were made to pay a hefty price as that man Murphy hit a superb score from wide on the left to tie the game as the clock reached full-time.

Five minutes injury time were signalled and before the first had passed, Derry led again through a brilliant Quigg free. McWilliams looked to have stretched the lead before it was bizarrely disallowed. It didn’t matter. Derry had done enough and would be heading to Croke Park.