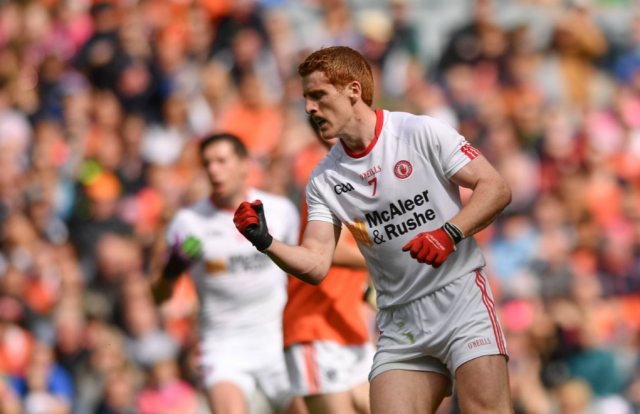 Mark Bradley was terrific for the back to back Ulster champions too, winning that penalty and scoring three important points to help secure a return to GAA headquarters for an August 27 All-Ireland semi-final tie.

It was a memorable evening for veteran full-forward Sean Cavanagh too who made his 88th Championship appearance for Tyrone and scored four points in what amounted to a routine win.

Armagh came into the contest with big ambitions after navigating all four rounds of the qualifiers but Kieran McGeeney’s side were no match for the power and purpose of the All-Ireland hopefuls.

Bradley was at his best early on and his industry and efficiency allowed them to open up that big early lead.

His fifth and sixth minute points put Tyrone 0-3 ahead and further scorers from Cavanagh and Tiernan McCann put five between the sides.

Armagh struggled to gain any sort of foothold in the game as Tyrone dominated the possession stakes with a well rehearsed counter attacking strategy.

Armagh didn’t help themselves with a number of errors. Goalkeeper Blaine Hughes tried a short kick-out in the 15th minute that Cavanagh got his hand to, allowing Harte to pick up possession and feed Bradley.

The Killyclogher dynamo raced through on goal but was hauled down by James Morgan who picked up a yellow card.

Even greater punishment was in store as Harte fired the resulting penalty to the corner of the net, opening up a 1-5 to 0-0 lead.

Jamie Clarke came into the contest off one of his greatest displays in an Armagh jersey.

The Crossmaglen colossus was brilliant against Kildare last weekend but a tough afternoon here summed up his team’s difficulties.

He lost possession with an early surge forward and then kicked a ball to a Tyrone player who launched a counter attack that led to a Cavanagh point.

Clarke’s one attempt for a score resulted in a wide late in the half as McGeeney’s men were held to just two points from play in the first period.

The scores came much easier for Tyrone who surged 1-8 to 0-4 clear by half-time thanks to further scores from Declan McClure, Cavanagh and Harte.

Armagh needed a huge second-half performance but conceded the first two scores after the restart as Tyrone moved ominously clear.

Mulgrew made a big impact when he came on for Conall McCann in the 44th minute and finished up with a remarkable 2-1.

His first goal in the 55th minute was a clever finish when he opened out his body and struck right footed despite being under pressure from a couple of backs.

That put Tyrone 2-11 to 0-6 ahead and his second, and Tyrone’s third, eight minutes lead sealed the big win.

That was an even better finish as he feigned a hand pass before kicking right footed to the net.