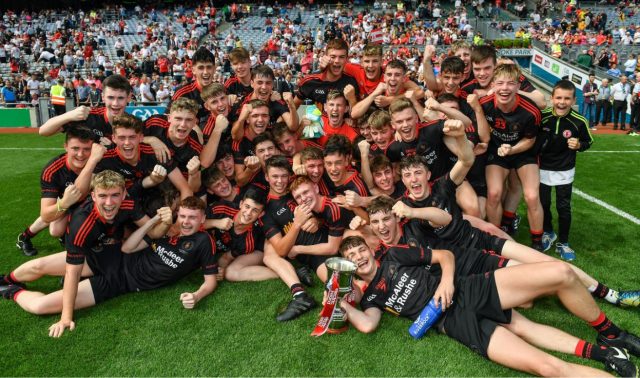 Tyrone are the inaugural All-Ireland Under 17 football champions after dispatching a talented Roscommon side at Croke Park.

Darragh Canavan, son of Tyrone great Peter, helped secure the coveted title with a thrilling 1-3 haul and his 50th minute goal was the decisive strike.

Roscommon had reduced an eight-point deficit to four at that stage, but Canavan’s right-footed rocket to the top left corner put Tyrone seven clear again.

Roscommon still refused to give in and battled all the way, but a second Tyrone goal from substitute Mark Hayes in the 63rd minute put the result beyond any doubt.

Colin Holmes, another former Tyrone star, was in charge of a slick and highly mobile young side that took the lead in the 10th minute and remained there all the way.

Canavan proved he’s a real chip off the old block with some excellent solo scores while Daniel Millar was on the mark with 0-3 and also won a free for free-taker Ethan Jordan, who hit 0-5, to convert.

Tyrone came into the game as favourites after taking out Meath, who’d previously beaten Dublin twice in the Leinster championship, and delivered on their potential.

Liam Tully’s Roscommon, powered on by big midfielder Shane Cunnane who scored 0-5, battled gamely, though, and refused to give up despite falling 0-10 to 0-2 down.

Roscommon started the brighter initially and twice led after points from the highly rated Peter Gillooly and Ciaran Sugrue.

But a burst of nine Tyrone points without reply between the sixth and 19th minutes including eye catching efforts from Joe Oguz, Tarlach Quinn and Millar put real daylight between the teams.

Cunnane got Roscommon going again with three points but the Rossies still trailed by 0-13 to 0-5 at half-time.

They returned to the pitch several minutes before Tyrone for the second-half and showed all their hunger with the first three points.

That left five between them and the same margin separated the sides after 47 minutes before Roscommon reduced it to just four with a Gillooly point, 0-14 to 0-10.

Canavan, who’d earlier had a goal ruled out for punching it to the net, struck his killer goal shortly after when he got on the end of a good move down the right and blasted back across to the far corner.

Tyrone had an impressive nine different scorers in total and got a real kick from the bench with subs Oisin McHugh and Michael Conroy contributing 0-3 before Hayes kicked their second goal three minutes into stoppage time.