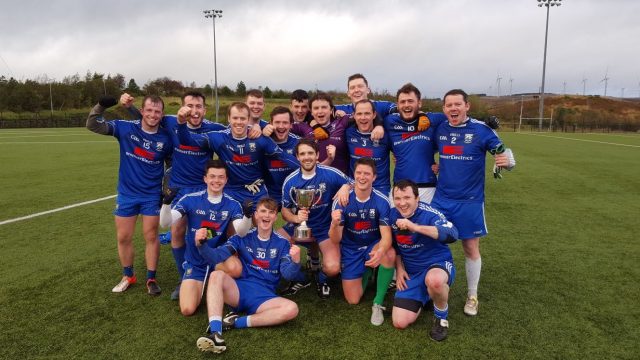 Mens Report
The tournament format was impacted by the elements as several of the pitches were not available but group stages were held on the grass pitches, with the 3G pitch then used to finish the competition. Four groups were created with three teams, the top two in each group progressed to senior quarter finals and 3rd placed teams met in 2 Intermediate semi-finals.

The senior title went to newcomers Glackins / Celltech who won a superb final 2-3 to 1-5 v First Derivatives of Newry. McAleer & Rushe took home the Intermediate title beating FinTru of Belfast in the final 1-5 to 1-3.

LCC looked to be flying in the group stages winning both games but were then knocked out in the quarter final by First Derivatives. Mallaghans also topped their group but came unstuck in the quarter final versus Glackins. The tie of the quarter finals was The GAA Store v Ulster Council. A thrilling one point game was in the balance for most of the second half but Tony Scullion’s team held out for the victory over the John O’Mahoney managed GAA Store team. Heron Bros looked to be in trouble when wind assisted Creagh Concrete drew level in the final quarter final but Herons managed to find another gear and pulled away in the end.

Glackins eye for goal on the 3G pitch proved too much for the Ulster Council team in the semi-final, whilst holders Heron bowed out to First Derivatives in the other semi final.

A superb final ensued with player of the tournament Caolan Daly kicking three  long range points in the first half to leave First Derivatives 1 behind after Glackin’s Ruairi McElwee expertly found the top corner of the net after a flowing move. It was nip and tuck thereafter but a diving, scrambled goal by Shay McArdle seemed to have won it for Derivatives. With time basically up, a turnover by Tomas McCann in the corner saw him work his way along the end-line before releasing inside to Conor Quinn who blasted to the net to leave it 2-3 to 1-5. FD drove up the field for one last ditch attempt but it wasn’t to be as the whistle went to cue wild celebrations by Glackins. A compelling final and  both teams now progress to the All-Ireland stages in February away to the Leinster winners. 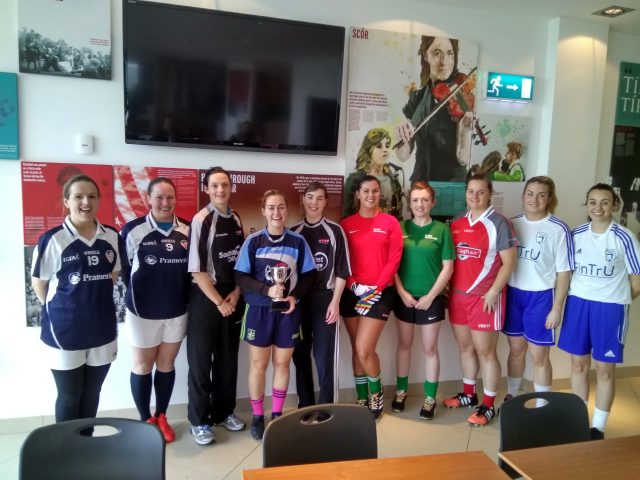 South West College and Pramerica may have taken the Ulster Ladies Interfirms silverware but ladies football was the big winner at the Tyrone’s Centre of Excellence, Garvaghey last weekend.

The competition, only in its second year, attracted seven teams from across Ulster. All levels of Gaelic football ability were welcomed to the event and a terrific day’s entertainment was enjoyed by all.

South West College won the Cup final beating last year’s champions Citi Bank in the finale. Noted intercounty referee Mags Farrelly won player of the tournament in a performance and she showed all her skills in the final despite Ciara Durnian’s best efforts for Citi.

Pramerica 1 won the Shield final beating a very competitive Mallaghan’s in the final. The sterling efforts of Eimear McClafferty helped the Donegal side get across the line. 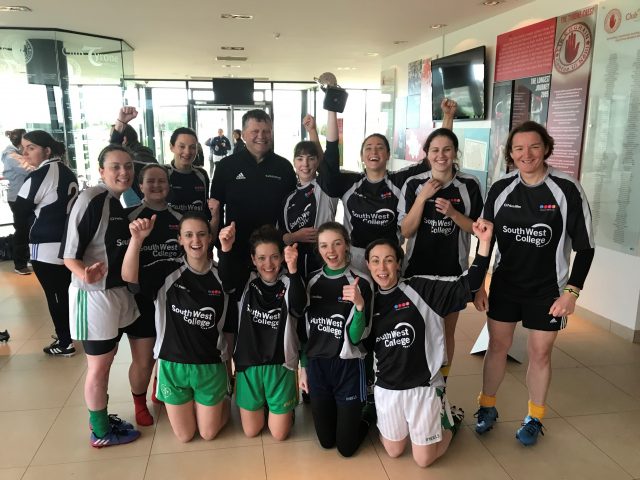